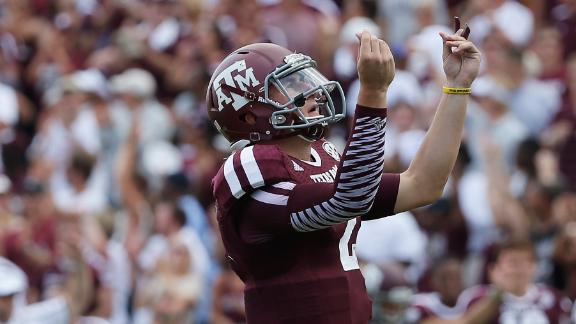 The 2014 NFL Combine is underway and the talk of the town is none other than Johnny Manziel.  The Texas A&M playboy has been the subject of much concern with his off the field antics, to his on the field play.

Manziel’s mouth should definitely be considered suspect when the QB said in an interview ,”I’m going to measure 6 feet — I’m 72 inches on the dot.”  However, during Friday’s measurements he came up a quarter short.  Manziel came in at 5’11 3/4, weighed 207 lbs and the size of his hands were 9 7/8”.

Although his height shouldn’t knock him from being a 1st rounder, it’s certain that it will play into the decisions of some teams and rightfully so.  And while many will bring Russell Wilson into the discussion of being under 6ft, let’s not forget that Seattle’s defense carried them and acquired the Super Bowl victory.

The key for Johnny Manziel will be to show his ability to work through his reads and progressions well.  Manziel has shown time and time again that he has play making ability, and many analysts will credit him that, but in today’s NFL it’s not enough…ask RGIII.

Johnny Manziel with his fellow 2014 draft prospects take to the field during the NFL Combine on Saturday February 22, 2014.