You are here: Home / Football / Leave Jim Irsay Alone… He Made The Smart Choice! 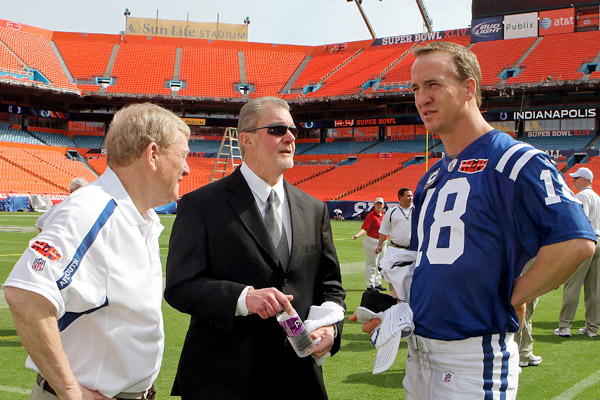 Let me start this article off by saying I am no big fan of Jim Irsay and have never been a supporter of Peyton Manning, the Broncos, the Colts, or Andrew Luck. I have no preconceived feelings of any of the players and teams involved. But I am having a hard time holding my tongue in light of Irsay’s recent comments this week in lieu of Manning returning to Indianapolis that are being ripped by the media. It is just disturbing, considering that I think everything Irsay has said and done thus far regarding Manning’s time in Indy is spot on. Why is telling the truth and making good decisions garnering Irsay such harsh critiques? 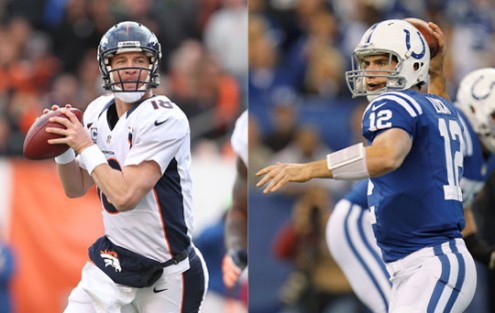 Let’s start at the beginning, when Peyton Manning went down with his horrific neck injury. Most people, both affiliated with the sport and fans alike, didn’t think Peyton could ever come back from the terrible injury at all, let alone at the level we have seen Peyton play in the last 13 years in Indianapolis. Peyton missed ALL of the games in 2011 as he was recovering and during that season, Irsay and the Colts decided to pay him in full (26.4 million) by placing him on IR instead of cutting him… and they did this despite the fact that it was clear that Manning would not play any games in 2011 and was unlikely to return to football at all. To me that was Irsay showing class… by taking a wait and see approach to Manning and his recovery process. If anybody could beat this injury it was Manning, and the Colts were willing to pay 26.4 million dollars to see how it all played out. The team went 2-14 in Peyton’s absence, and had the unique opportunity of drafting either Robert Griffin III or Andrew Luck, both who were viewed as long term potential NFL starters. Now there was a decision to make…

Irsay and the Colts had a choice: Stick with Peyton and pick up an option on his contract that would pay him 27 million with his injured neck… or cut ties with Manning and go young with either Luck or RG III. This was no easy decision, that is for sure. Irsay and the Colts loved Peyton… this was evident in the fact that they paid him so much money to NOT PLAY AT ALL IN 2011. And now they were faced with a conundrum. Even if Peyton was healthy after the surgery, how much longer would Peyton have playing at such a high level? He was going to be 36 after all… and not many NFL QBs in history get BETTER after age 35. They usually decline. So even if Manning was fully recovered, how long could they count on him? Luck & RG III were both viewed as long term NFL QBs… projected of course. There are no guarantees in a draft pick after all. But wouldn’t the youth movement make sense? It was a difficult choice, and they conferred with Peyton on the whole process. It has come out recently (click here for the article) that Manning even told Irsay to let him go and draft Luck… Manning felt it would be “crazy” not to draft Luck. So the Colts and Irsay decided to part ways with Manning… and they drafted Andrew Luck #1 overall. 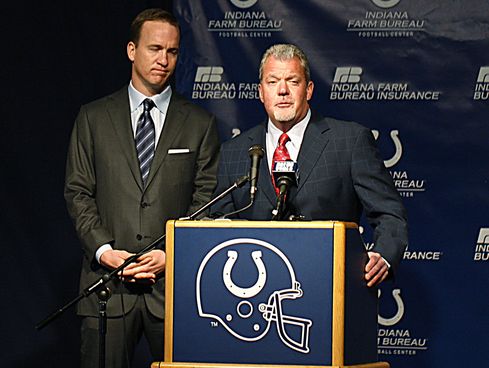 Manning went on to have the teary eyed press conference with Irsay and then decided to sign with the Broncos. Luck was cleared to be the man on a young Colts team for years to come, and Peyton was going to get a chance with some great young talent around him in Denver. Everybody seemed happy. In the first year after his release Manning lead the Broncos to the second round of the playoffs, which they lost in epic fashion to the Baltimore Ravens. Andrew Luck helped turn the Colts around from 2-14 to 11-5 and a playoff birth. It seemed like both sides were reaping the benefits of the Manning/Colts divorce. This year both teams are doing extremely well, with Manning playing out of this world and Luck being the third most efficient QB in the league. Now we are on the cusp of Peyton Manning’s return to Indy for the first time in a rival uniform, and people are ripping apart Irsay for comments he made about Manning’s tenure in Indy. Why???

Irsay made comments about the Manning era and has been disparaged because of it. Irsay pointed out that despite making the playoffs 11 times under Manning they only have one Super Bowl ring to show for it, and Manning did lose in the first round 7 out of 11 times. He also went on to say that fans love to see the “Star Wars” numbers like what Manning/Harrison/James put up during the years Manning helmed the team, but at the end of the day he would trade all those numbers for a few more rings. So yeah… what exactly did Irsay say wrong? Despite 140 wins in 13 seasons (not counting season 14 in which he played and therefore won 0 games) Manning only had one ring to show for it. 9 wins in 19 playoff games? From the guy people call the greatest QB ever? That is subpar at best… and so why is what Irsay saying wrong?

Listen, I know people say Irsay should be grateful for all the good that the Colts got from Manning’s tenure. But where does it end? It is not like he won 3 rings, played in 5 Super Bowl’s like Brady. Two Super Bowl appearances, 1 win and 1 loss. A ton of regular season success and lots of bulky numbers. But did Irsay make any statements that were factually incorrect? I don’t think so. Not to mention that it seems like he and Manning were right about Andrew Luck. Luck came in an turned around a team that had was the worst record in the league. And he did it with fellow youngsters like TY Hilton, Coby Fleener, and willy vets like Reggie Wayne. 11-5 with a playoff birth? Yup, I’d say the pick of Luck was a good one. He has continued that success so far this season, with the Colts sitting at 4-2 and leading their division. Now I know its easy to look at all the great Manning has done in Denver so far, but hindsight is 20/20. No one could expect Manning to play EVEN BETTER than he had in Indy, which was awesome, and he has. But for how much longer? 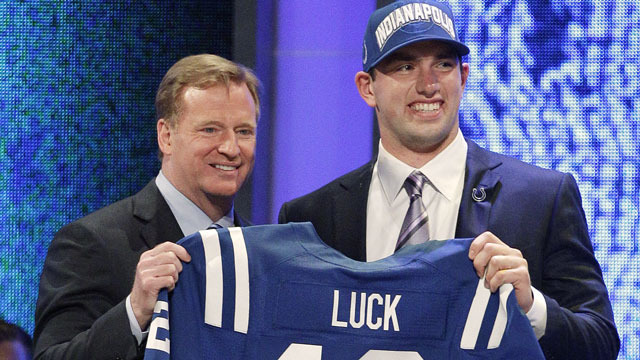 The other aspect of the argument is the salary cap considerations. Luck is only in his second year, as are Hilton and Fleener. That means three of the main offensive weapons on the team are on rookie wage controlled contracts… which is considerably less than what Manning would have made. Luck’s whole 4 year contract is worth 22 million, and Manning made more (26.4 mil) in the year he didn’t even play!!! That means more room to pay weapons like Wayne to stick around and attract potential free agents to the team. Luck will eventually get his money… but it will be down the road. For the next few years, he will make much less. This is the model becoming much more prevalent by NFL teams in the present day. SO why is Irsay wrong for defending his choices considering that his replacement pick in Luck is doing just fine and his team is in better financial shape without Manning?

Personally, I agree with Irsay in this case. Manning’s track record speaks for itself… he has all the stats, a ring and is a 4 time MVP. The dude is a stud. But his lack of playoff success is hard to overlook. Time will tell on Andrew Luck, and after 10+ years in the NFL than he could be compared to Manning. But so far the moves Irsay made looks pretty damn great. Now that Manning is 37 his window is rapidly closing. Luck is just starting out. The future is bright in Indy. Good for Irsay in calling a spade a spade and loving his teams current lot in life…. 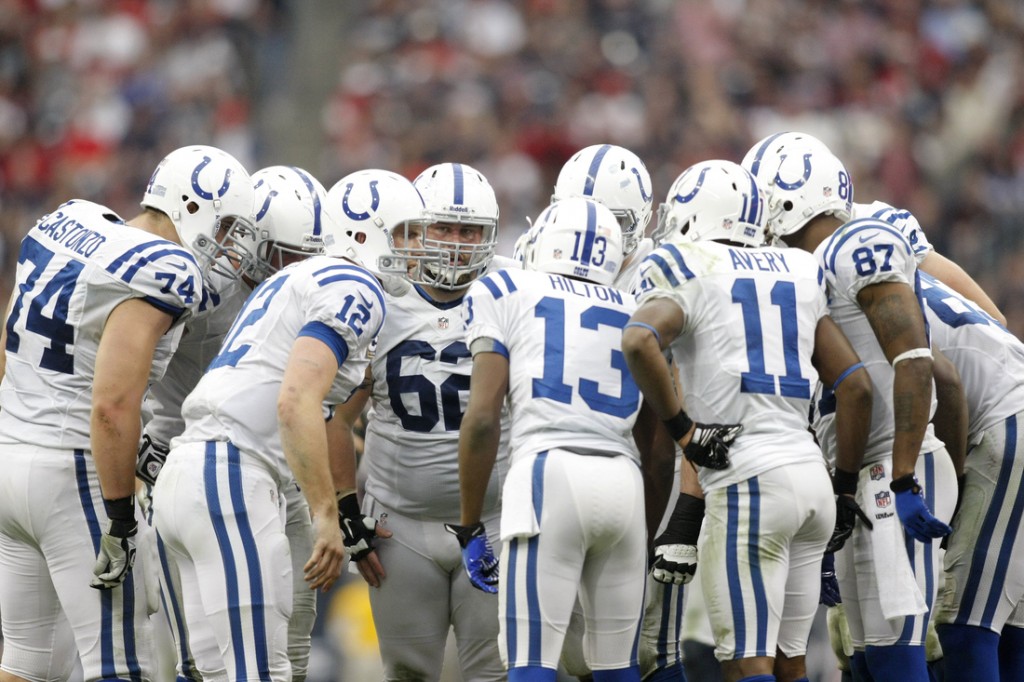