You are here: Home / Basketball / LeBron James and being “the next Michael Jordan” 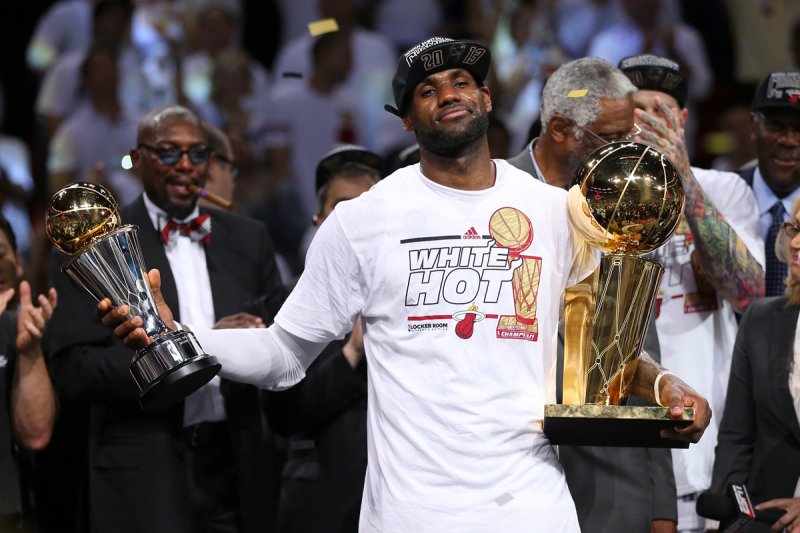 With the Miami Heat falling to the San Antonio Spurs in the 2014 NBA Finals, a whole new round of “LeBron James will never be Michael Jordan” discussion seems likely to start up again (and has already if you subject yourself to reading posts from the Twitter commentariat). Whenever a LeBron-led team fails on a big stage, you can count on Michael Jordan to start trending again for that reason. You can also count on a plethora of inane criticisms of LeBron, not just from Internet commenters (I read a tweet criticizing LeBron’s “follow my lead” statement in a Game 5 team huddle as not being team-oriented) but also from national media members like Skip Bayless.

Anyway, debating the “next Jordan” is one of the basketball community’s favorite pastimes, whether it’s LeBron, Kobe Bryant, or various other candidates who have tried to take this mythical title. The use of Jordan as a synonym for transcendent greatness has been extended to fields that having nothing to do with basketball or even sports. For example, Jay-Z says “I am the Mike Jordan of recordin” in his 2006 song Show Me What You Got to express his dominance of the rap world (as good an excuse as any to listen to that song again):

The premise of the “next Jordan” debate is that MJ, by definition, is the greatest basketball player in the game’s history. Anyone who pays enough attention to basketball knows the case that Jordan has made for himself, and there’s nothing wrong with arguing Jordan as the greatest of all time – I might even make the case myself. However, these debates sometimes become insufferable when people consider Jordan as the greatest of all time by definition. These people are who I call “MJ fundamentalists” and they can be identified by their strict faithfulness to the gospel of His Airness. When they debate the greatest players of all time, they work backwards from their preconceived conclusion that Jordan is the greatest (because he is – by definition!) and only interpret information in such a way that it supports that conclusion. My generation (current 20-somethings) in particular has a lot of MJ fundamentalists because #23 was who we idolized growing up.

Even before LeBron came out of high school, he was arguably the most-hyped player the basketball world had ever seen. Despite the weight of the expectations placed on him, he’s actually managed to surpass all realistic expectations and even some of the unrealistic ones. Therefore, as his career has progressed, the Jordan comparisons have started to pick up more steam. And as LeBron piles up accomplishments, MJ fundamentalists have gradually had to paint themselves into smaller and smaller corners. It started with the standard “his cell phone only vibrates because it has no rings” jokes and then moved to the strange “he has too much help in Miami so it doesn’t count” trope (because Scottie Pippen was a scrub). During Game 1 of these Finals, some basketball writers tweeted sarcastic jokes about how Michael Jordan wouldn’t have cramped up like LeBron did or that he would have played through the cramps – it’s not hard to imagine MJ fundamentalists stooping to that level of criticism.

All of these LeBron-MJ comparisons neglect to address one issue though: Why does LeBron James have to “be” Michael Jordan (and what does it mean to “be” someone else, anyway)? The “next Jordan” comparisons and debates seem to assume that being the next Jordan and being the greatest of all time are one and the same; that is, in order to be the greatest, a player must do things as MJ would have done them. What if that wasn’t the case, though? What if LeBron could just simply surpass MJ without ever “being” him? After all, some evidence exists to prove that LeBron does many fundamental things better than Mike, such as rebounding, passing, scoring efficiently, and defending (all statistics from basketball-reference.com):

Of course, much evidence also exists indicating that Jordan was the better player (Hollinger PER, turnover rate, most scoring metrics), but the point here is not to settle the “LeBron vs. MJ” debate. I think that it’s very difficult to compare across eras, and LeBron’s career isn’t even close to being done yet anyway. The point is that any discussion of the “Player A vs. Player B” type (or any discussion of anything opinion-related, really) is most productive when everyone acknowledges that no right answer exists definitively. After all, why are we discussing if a correct answer has been pre-determined? The fact that Jordan’s name has become synonymous with “greatest” shows just how much his untouchability is entrenched in popular culture, which hinders discourse (by the way, I’m not suggesting that we should stop using his name that way, but merely to recognize how we could be biased by that type of usage).

Lastly, having to watch LeBron’s every move through the “will he ever be Jordan” lens is tiring and makes it hard to enjoy his greatness (sure, the Miami Heat were thoroughly dismantled by the San Antonio Spurs, but if you subscribe to the “which player would cause his team to fall off the most through his absence” definition of the MVP award, there’s almost no question that LeBron should have won it for this year’s Finals) – it’s like eating a great meal but having to hear your friend constantly harp throughout about you guys should be having Four Seasons brunch instead. Comparing all-time greats is fun, but it doesn’t need to affect how we view every one of LeBron’s missed shots. We also need to realize that as long as basketball is a popular sport that kids strive to play at a high level, chances are that someone will eventually surpass Michael Jordan. Every generation is a roll of the dice in terms of genetic composition, innate talent, basketball environment and competitive drive; with enough generational evolution, one is bound to hit the jackpot and we’ll witness feats that we have never seen.

For now, let’s sit back and appreciate the once-in-a-generation talent we have in LeBron – when the time comes to debate his legacy, we can do it (and it’ll be fun). And when the time does come, LeBron might be the greatest, or maybe he won’t be. But one thing is for sure: He doesn’t have to “be” MJ to get there.

Dar-Wei can be found online on Twitter (@chendw) where he opines about sports, current events, music, magic tricks, science, and better living. In the offline world, he can usually be found at the nearest basketball court where he’s often complaining about a travel call made against him.