You are here: Home / Entertainment / LeBron James and Kevin Hart to make a buddy comedy movie 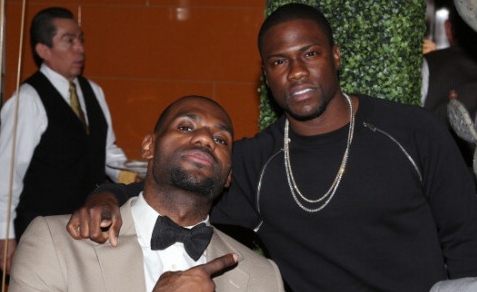 LeBron James and Kevin Hart are at the top of their respective fields and often run in the same circles.  They are arguably two of the most recognizable figures in sports and entertainment right now. Naturally successful people like to embark on projects with other successful people and that is what we have here.

According to a report from deadline.com, James and Hart will co-star in a comedic movie called “Ballers” once a script is written and the schedule of James clears up.  An excerpt from the article explains some of the details.

Hart will first co-write the comedy along with his scripting teammates Joey Wells, Chris Spencer and Harry Ratchford. He’ll then star as a man who lives in the shadow of his NBA superstar brother (James), but gets a chance to prove himself when he and some pals attend a weekend fantasy basketball camp in Miami.

The film is set to be released through Universal Pictures and Imagine Entertainment with Brian Grazer and Michael Rosenberg as the producers according to the article.

Athletes often venture into the field of acting and bomb when they try to do more than just a cameo appearance. But LeBron is not just a student of the game but is very much a student of life. There is little doubt he will give his acting career the same effort he displays in the craft that made him famous.

Hart and Universal aren’t taking a big risk as the budget for the film should be relatively moderate and he is staying in his niche of comedy. A lot still needs to be determined but folks may want to put this one on the list when a release date is formally announced.