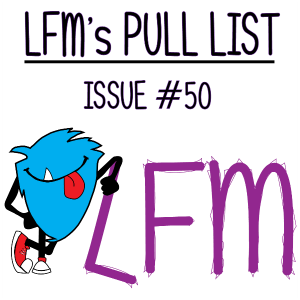 Los and Vito D step out of the confines of the LFM studio and take the Pull List to Free Comic Book Day. Recorded live at Docking Bay 94 Comics and Games in Coconut Creek, Florida, Episode 50 is here.

The Amazing Spider-Man 2 got things started this week. Was Mark Webb’s second effort worth swinging into the theater for? From a Spider to a Snyder; news broke just hours after last week’s episode, The Justice League movie is coming and so is the hate. Los and Vito D discuss where they stand, are they Team Snyder?

Plus, what better way to kick of May the 4th than with some exciting Star Wars news? Finally the cast has been revealed. Star Wars Episode VII is all the rage around here.

Of course how could we spend 10 hours in a comic book store and not bring you our comic picks of the week. First up fix yourself a cup of sweet tea and travel down south with Image’s Southern Bastards #1. Peter Parker is having a big week! First he returns to the big screen but more importantly to the Marvel comic universe. Amazing Spider-Man #1 is here, web diapers and all. DC Comic’s Batman Eternal still has out attention as issue #4 releases and Dark Horse brings us new Star Wars with Star Wars Rebel Heist #1.

We had a blast meeting people all day and hanging with the crowds. Luckily we were able to have the extremely talented artist Jude Millien sit down with us to discuss his comics career and his exciting upcoming creator owned project ABSOLUTE. Thanks again to Docking Bay 94 for having us and welcome to the LFM family new friends and listeners!