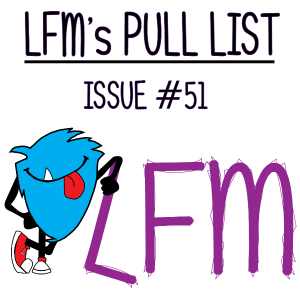 LFM’s Pull List: Issue #51 “Dammit Chloe” The following takes place between……events occur in real time. The guys return to the studio this week with a lot to get to. Oh Jack Bauer how Los has missed you but was 24: Live Another Day the welcome reunion Los had hoped for?

Following last week’s mysterious Star Wars debacle we get to follow up the loss with come Episode VII talk, from the cast to the possible title, our excitement for the new trilogy is high. Not as high as Los should’ve been when he watched Escape from Tomorrow, the film shot guerrilla style at the “happiest place on earth”, Disney World.  DC Animation brought us the newly released Son of Batman with surprisingly, no cameo from Maury Povich. Paternity tests aside, did the latest effort live up to the normally stellar animated features?

From one dad to another, Oliver Queen has his hands full with Deathstroke and his army of mini-me’s. We take a look at Arrow and its upcoming season finale. Marvel made some big TV news this week involving Agents of S.H.I.E.L.D. and the long rumored Agent Carter.

The comic book world is one of our favorite places and this week we got a release that made it even more special. Already a show favorite, Joshua Williamson elevated himself to “Lemire Status” for Los with Nailbiter #1; one of our most anticipated titles of the year since its announcement at Image Expo. If you think comics aren’t your thing, read Nailbiter #1 and then we’ll talk. James Tynion IV brought us his first original comic series with The Woods #1. Vito D tries to make amends to all the Spidey fans out there with his review of Miles Morales: Ultimate Spider-Man #1 and he also updates us on Marvel’s new event Original Sin.

Not to be outdone, DC has an event of their own, a weekly one at that. I know what you’re saying, “How can we have another event when the last one hasn’t even finished?” We’re going to pretend that we’re DC and ask that you just forget about that, they moved on and so should we. Remember that Lemire guy Los refers to ALL THE TIME? If it weren’t for Brain Azzarello and Jeff Lemire Los would never be recommending The New 52’s Futures End. Only those two can make Los forget the Forever Evil fail and move on. Plus Batman Beyond is involved!

Episode 51 is here for your enjoyment, welcome new friends to the LFM family!