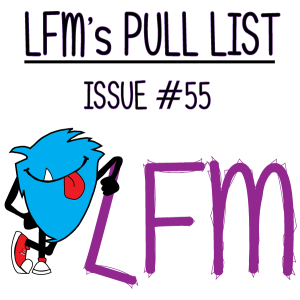 Lil Furry Monster Presents: LFM’s Pull List: Issue #55 “More Than Meets the Eye”
LFM’s Pull List: Issue #55 “More Than Meets the Eye” It’s a Vito D takeover. Los swore he wouldn’t be caught dead anywhere near Transformers: Age of Extinction so while he was out living his rock star dreams, Vito D used the opportunity to bring us his review of the latest installment in the Transformers movie franchise. Hey, Mark Wahlberg is in it! It was a good week for Vito D. The highly anticipated Geoff Johns / John Romita Jr. takeover of Superman has finally arrived with issue #32. Did the new issue stack up or is Vito D’s hero doomed for mediocrity since his name is not Batman. Our other comic picks of the week include Robert Kirkman’s Outcast #1, Stray Bullets #4 and Alex + Ada #7. Remember when we told you Los was out living his rock star dreams? We meant in front of the stage of course, not on it. Los went to see his beloved Phantogram and wait until you hear about the tri-county nonsense he got himself into this time. Only Los….