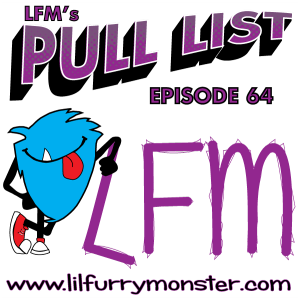 LFM’s Pull List: Issue #64 “Los and Vito D’s Super Badass Pull List Podcast” Not much going on in theaters these days luckily Captain America: The Winter Soldier has released on Blu-ray. They haven’t added any more Falcon so is it worth your dollars? Netflix never lets Los down. No Bollywood this week though instead he sparked up with Jay & Silent Bob’s Super Groovy Cartoon Movie. Pretty soon there may be as many Superhero TV shows on TV as Reality shows. Supergirl and Teen Titans may be heading the small screen. Speaking of “Reality TV”, Vito D just can’t help himself as he tries to push his Utopia on us. If Los has to sit through it so do all of you. You’re Welcome. If it’s not awful reality TV Vito D fills his time with its video games. This week he has the popular Destiny and he actually scares Los with his recommendation of Outlast. Nightmares mean no sleep; no sleep means more time to read! Our Comic Picks of the week start off with Stumptown #1, Grant Morrison’s Annihilator #1, Spread #3, Velvet #7, RoboCop #3, Boom’s Wild’s End and finished off with the Sci-Fi Western from Image, Copperhead #1. Snootches!!!!