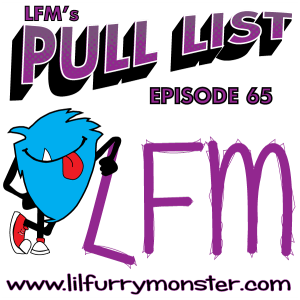 LFM’s Pull List: Issue #65 “I Am The Walrus” #WalrusYes, Tusk is here! We know Los loves Kevin Smith like a fat kid loves cake but is Silent Bob’s new Horror/Comedy worth a trip to the theaters. Who doesn’t want to see a man turned into a Walrus? The Supergirl TV project finds a network backer in CBS and Vertigo’s Lucifer looks to be making its way to television as the comic book properties continue their takeover of your regularly scheduled programming. Marvel fans are excited, we’ve been given a release date for the Doctor Strange movie as well as the announcement that the Deadpool movie is moving forward. Tons of great comics this week, it was hard to only pick a few. Vito D brings us Spider-Man 2099 #3, Superman #34 and Stray Bullets #7. Los has a couple Image titles in the new Oddly Normal # 1 and the always stellar Wicked + Divine #4, plus the BEST BOOK OF THE WEEK and Los’ favorite Superhero comic in a long time, Jason Latour’s Edge of Spider-Verse #2: Gwen Stacy Spider-Woman. Seriously this book needs to be a major ongoing title like NOW! You’ve been put on notice Marvel!