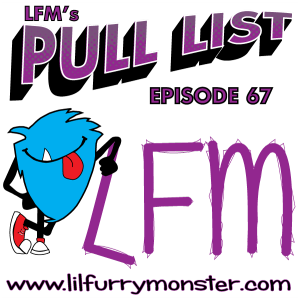 LFM’s Pull List: Issue #67 “I Like Your Doll” October is here, Bring on the Horror! Los busts out the demonic chants and went out to see if he could conjure up some scares with Annabelle. Does the Conjuring spinoff deliver or disappoint? I think most of us are in agreement when we say we’re disappointed with the debut of Gotham and it is still early, but did the follow up episode give us any hope? What about S.H.I.E.L.D.? Well, let’s just say it is what it is. Good news though, Star Wars Rebels debuted an hour movie to kick off the new animated adventure and it’s got the guys very excited. Our comic picks for the week kick off with a book that may have been under a lot of radars, Dynamite’s The Damnation of Charlie Wormwood. Los follows that up with two books that have garnered a lot of media attention, Marvel’s Thor #1 introducing the new female Thor and DC’s Gotham Academy #1. Vito D has Jason Aaron’s Men of Wrath, DC’s Lobo #1 and The Flash Season Zero #1. Los rounds out this week’s picks by celebrating the return of his favorite Lil Depressed Boy and the always amazing Alex + Ada #9. Don’t forget the LFM crew will be at Spooky Empire’s Ultimate Horror Weekend. Head over to http://www.spookyempire.com/ and get your tickets.