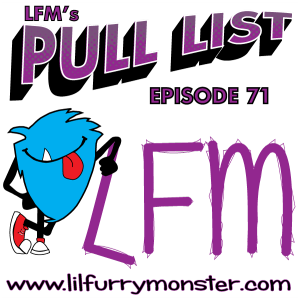 LFM’s Pull List: Issue #71 “Science Boners” E=mc Hammer? I don’t know but we’ve got a lot of science going on around here but first Los continues his crowd funding philanthropy and brings us two exciting projects for you Horror fans. First up the Indiegogo campaign for “Everybody Goes to Hell” – Whatever you do STAY AWAY FROM THE DOORS!!! Next up is the Kickstarter campaign for “Muck”. LeeAnna Vamp is involved; nothing more needs to be said. Links to both projects are shared below. Released in theaters this week was two movies very much anticipated by the LFM crew, two Sciency Science movies hence the science boners! First up was Christopher Nolan’s Interstellar. Los headed to the Imax for this one and we find out if it’s worth exploring or not. Next up the family friendly Big Hero 6; How was Marvel and Disney’s first animated release? Was it everything the guys had hoped for? Star Wars gave us it’s next Episode title and that got the guys geeked up over Star Wars but really it never takes much for that to happen. The TV roundup got interesting this week as Vito D and Los seemed to be heading in different directions now on some of their past favorites. Arrow, Constantine, and The Walking Dead, we’re looking at you. Vito D catches Los in one of his awkward Bollywood Netflix binges. Thankfully for Los he’s able to change the subject with some great comic books picks for the week. Vito D brings us Image’s Birthright #2, Tooth & Claw #1 and Marvel Icon’s Men of Wrath #2. Los counters with Image’s Penny Dora and the Wishing Box #1, Dark Horse’s The Ghost Fleet #1 an d back to Image with a comic that has Los so excited he had to actually stop talking to avoid any kind of restraining order. The Humans #1 is here and is everything Los wanted it to be. Monkeys on Motorcycles! We’ll leave you with that….Have a great week everyone!

Everybody Goes to Hell – Indiegogo https://www.indiegogo.com/projects/everybody-goes-to-hell-horror-feature-film–2