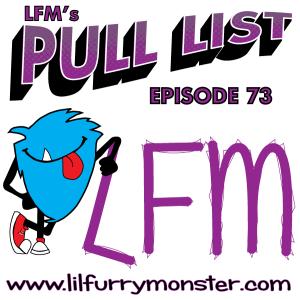 LFM’s Pull List: Issue #73 “Can You Dig It?” Sometimes being brave isn’t enough, you have to be BOLD! Who better to teach us that lesson than The Arrow and The Flash? The anticipated cross-over event came, it saw and well you’ll have to listen to hear if we thought it kicked ass or not. The Walking Dead mid-season finale happened. You know that Terminator movie that no one asked for? They dropped their first trailer this week and we’ve got a very passionate response from Vito D-100. DC’s Suicide Squad gives us some big casting news. Marvel finds their Dr. Strange, Jessica Jones and Deadpool. The Goldbergs spark up some hover board talk. Los dominates Jeopardy and tries to prove that reading comics actually makes him a genius. Speaking of comics, Shaft makes his comics debut courtesy of Dynamite and you know Los is all over that. The Humans return with issue #2 and Ghost Fleet #2 round out Los’ picks of the week. Vito D has Men of Wrath #3, Dark Gods #2 and Hellboy and B.B.R.D. #1. CAN YOU DIG ITTTTTT? Cue Los’ theme music…