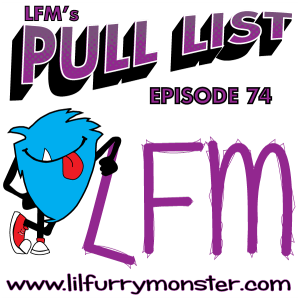 LFM’s Pull List: Issue #74 “Los’s Kryptonite” Throughout these episodes we’ve learned that Los has many weaknesses, his very own kryptonite if you will. Pretty much, if you put a shark, a monkey or Zoe Saldana on it, Los is buying it, reading it or watching it. Add Rosario Dawson to that list as Los brings us a mini-review of the new Chris Rock movie Top Five. We know that a movie like that goes against most of the usual program around here at the Pull List so don’t worry we couldn’t spend too much time on it as there was way too many things happening in the Pull List world. Speaking of which, has everyone picked up their Guardians of the Galaxy yet? Maybe some of you have picked up multiple copies??? If so could you let Los know so he doesn’t feel like the only crazy person on the planet? Remember the Spider-Man to Marvel rumors that came out of the Sony hack? Looks like it’s still a possibility and we take the opportunity to discuss the possibilities here. Speaking of rumors, Vito D thought it would be a good idea to send Los some Star Wars EP VII spoilers this week and it didn’t go over very well.

Mid-season finales have all come and gone meaning now we all have about a month to catch up on the rest of our lives but they sure left us with plenty to talk about while we await their returns. The Flash has been one of our new favorite shows and they did not disappoint. Some questions were answered but for ever answer we got, we got 5 more questions. We’re talking about you Dr. Wells. Arrow answered some questions; we’re just not sure if we wanted the answers. Agents of S.H.I.E.L.D. even made the cut this week. Man these guys must be in the holiday mood or something.

As always we round the show up with our comic book picks of the week. Los has been waiting for this week for quite some time now; I mean he’s only been shouting the title of this book from the rooftops for months. That’s right…BITCH PLANET is here and not only is the book has amazing as he imagined it has managed to even exceed his already high expectations. Keeping it in the family, Sex Criminals returned with another stellar issue. Vito D loves him some Southern Bastards and Los wraps things up with The Valiant. Oh and has anyone heard of this Krypton show???