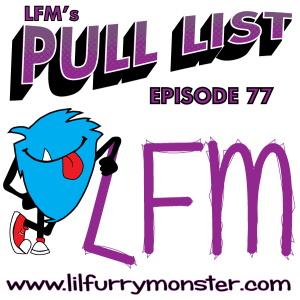 LFM’s Pull List: Issue #77 “Magic City Baby Showers” Joining us in studio this week once again is artist and comic book creator, Glaister “Silverback” Ornsby. Silverback and Los recount their time at Magic City Comic Con. Silverback’s Hell & Holy Water had a great debut at the Con and while Silverback was busy locking up some celebrity cameos for his upcoming issues Los was having some adventures of his own. Magic City was great but the fun didn’t stop there. Being away for a week meant we had a lot to catch up on. Kicking things off in the TV world, we’ve got some Agent Carter, the return of Arrow, The Flash and some big news from Star Wars Rebels. Batman v. Superman rumors brought up some interesting conversations this week and Marvel Comics Secret Wars announcement was one that couldn’t be ignored. Of course what would the Pull List be without our comic book pics of the week (or last two weeks)? While Marvel may be on the verge of upsetting or exciting millions of comic readers there is one thing we can all get behind and that’s the release of Jason Aaron’s Star Wars. The impressive debut made the top of our list this week and Vito D has some other books he thinks you should check out. Enjoy the show everyone! Until next week…

Get more info on Glaister “Silverback” Ornsby at: http://www.silverback-comics.com/