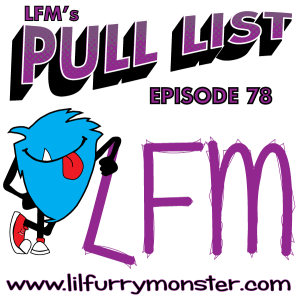 LFM’s Pull List: Issue #78 “Monkey F*ckers” Big thanks to Jack & Hannah, a little duo out of Canada, for getting things kicked off for us this week. Los is at the music thing again but bear with him, there’s always a method to his madness, and this time he could use your help. Once Los is done playing Carson Daly it’s time for the Pull List to start. Why not start off with everyone’s favorite, AQUAMAN. That’s right; the King of the Seas gets the starring role in DC’s Animated Justice League Throne of Atlantis. So are getting some sushi grade entertainment or some discount frozen fish sticks here? The theaters may have not been able to get Los’ attention but the movie “Dear White People” sure has and he thinks it deserves your attention as well. Plus what would the Pull List be without our Geek TV roundup? Peggy Carter is still crushing it but what’s going on with some of our other favorites? Then it’s time, that’s right MONKEY F*CKERS, It’s time for The Humans #4. It shouldn’t be a surprise by now that Los is kicking off the comic book picks with his favorite, but why stop there? How about some Saga #25 and a new comer from Boom! Cluster #1. Vito D brings us the new Grant Morrison comic, Nameless #1, Star Bullets and Marvel’s Star Wars #2. Enjoy your week SKINS!

Music by: Jake and Hannah: http://youtu.be/sKGX4Vfn3VA