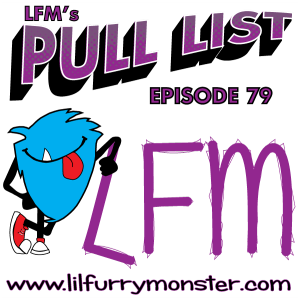 LFM’s Pull List: Issue #79 “Unite the Seven” So, seems has though the seas have parted on the big Aquaman reveal this week but before we get into the waters we’ll take a trip through Hell and who better than to guide us than the creator of Hell & Holy Water himself, Silverback. That’s right Vito D’s favorite is back and he’s got some exciting news to break here on the Pull List. Silverback is bringing us new projects and an exciting crowdfunding campaign that gives you guys an opportunity to be part of the story, of course there is the crowd favorite breaking of Vito D’s balls as well. Now back to that Sea King we mentioned earlier and since we missed a week we never got a chance to talk Spidey/Marvel news. Geek TV round-up got heated this week, Arrow, Gotham, The Flash and Agent Carter all had the studio divided this week but it wasn’t until Vito D almost had a heart attack as he nearly cleared the studio when The Walking Dead was brought up. Comic picks of the week were a little light this week but we’ve got Image’s Secret Identities making the list. All this and more, enjoy your week everyone!