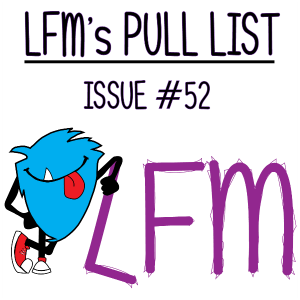 LFM’s Pull List: Issue #52 “Talk S*** Get Shot” It’s our last week in the studio before we hit the road to May-Hem and we have a lot to get to. Expectations were high for the new GODZILLA, I believe Los’ words were “Movie of the Summer”. How did the King of Monsters stack up? Is the title of “Movie of the Summer” still out there for the taking? And if so can Wolverine and Co. stick their claws into it? We’ll let you know with our review of X-MEN: DAYS of FUTURE PAST.

We may still have to wait a couple of years but we’ve got our title for Zack Snyder’s Man of Steel follow up; BATMAN v. SUPERMAN: DAWN of JUSTICE. More importantly we got our first look at Affleck in the Bat-Suit. Los has never been more excited. What would a Pull List episode be without ARROW? We’re going to find out now that the season is over but not before we take a look back at the finale. We also got our first peek at the upcoming THE FLASH series and it looks like we’ll have some new competition for Mr. Queen and company. The fall TV season is going to be a good place for comic book fans.

It’s been a few weeks now since the release of Nailbiter #1 and its greatness may have ruined all other comics for Los but Vito D has a new title for us that looks to satisfy the wait for issue #2. THE UNITED STATES OF MURDER #1 from the creative team that brought us POWERS is our comic pick of the week and oh yeah, FOREVER EVIL ended. So yeah that happened too.

Enjoy the new episode and we’ll see you next week at May-Hem in Orlando. There’s still time to get tickets so head over to www.spookyempire.com to join the party.