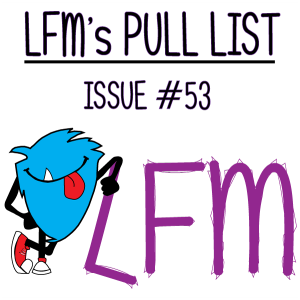 LFM’s Pull List: Issue #53 “The Edge of May-Hem” The guys are back! We finally get a rundown of what actually took place in Orlando at Spooky Empire’s May-Hem convention. Los brings us some great sci-fi action with his review of The Edge of Tomorrow. Rumors of DC’s possible future movie lineup have been revealed. Han Solo is broken. Aquaman is a bad ass. Man, a lot has happened since we’ve been away. That means a lot of great books have been released too.

Nailbiter continues to be one of the greatest comics out there. We’ve got our thoughts on issue #2. Warren Ellis’ Trees #1 gives us a different take on the alien invasion. Southern Bastards drops its second issue. Vito jumps back on the Spider-Man bandwagon with the Amazing Spider-Man #2. Los brings us some creepy goodness with The Empty Man #1. Plus we’ve got the new Image title Red City #1.

Pay close attention this week, you may just get your hands on some prizes. Why only let the live crowds have all the fun? Keep an eye on our Facebook and Twitter throughout the week for more details.

As most of you know, it’s been a rough couple of weeks for the LFM family and we’d like to thank you for the support we received from all of you. We’re glad to be back on the horse and we’re happy to bring you this new episode. Have a great week everyone!