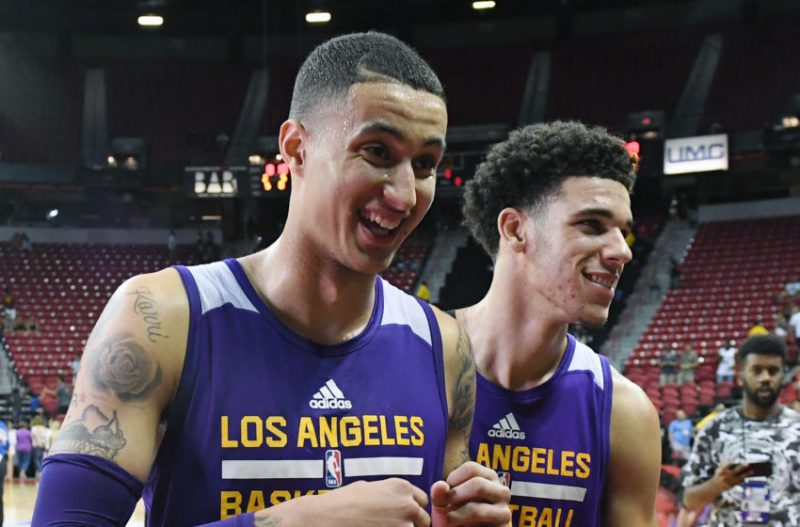 NBA Summer League 2017 concluded tonight with the Los Angeles Lakers and the Portland Trail Blazers going head to head in the championship round. The Lakers were without their star guard, Lonzo Ball, due to a calf injury which changed the BetOnline odds on this game, but his young teammates showed up to fill his shoes and captured the win. Ball is set to undergo an MRI when he returns to Los Angeles.

Portland got off to a quick start led by Jarnell Stokes and Jorge Gutierrez giving them a 7-point lead within the first few minutes of the game. The Lakers caught up to take the lead with a big effort from Kyle Kuzma and Matt Thomas, but Portland quickly rebounded and finished the first quarter slightly ahead at 30-27. Stokes shot well from the field, and as a team Portland dominated Los Angeles at the free throw line. The Trail Blazers showed early commitment on the boards, and worked hard to protect the ball with far fewer turnovers than the Lakers heading into the second quarter.

Magic Johnson joined the commentators at the start of the second and spoke highly of what Ball has brought to the Lakers in the short time he has been with them. Johnson explained that Ball’s shooting has been great, but he’s been mostly pleased with the amount of assists and rebounds he’s seeing from the rookie. He went on to say that he’s happy to see the leadership Ball is showing on the team, and that he’s made it fashionable to share the ball once again.

Portland maintained the lead well into the 2nd quarter, but the Lakers weren’t far behind as Kuzma worked his way to the rim, and the free throw line. Kuzma averaged 20 points per game at Summer League, and shows to be a versatile asset as he’s able to easily shift from the 3 to the 4 when needed. Los Angeles took a time out with just over 5 minutes to go in the 2nd to regroup as the Trail Blazers’ lead shot back up to 8 points. The Lakers quickly refocused on defense working to get rebounds while forcing 4 turnovers from Portland in the process. Excellent ball movement from Los Angeles combined with poor transition defense from Portland allowed the Lakers to catch up within just 1 point heading into halftime led by Kuzma with 19 points.

Opening the second half, the Lakers and Trail Blazers battled back and forth for the lead with Ivica Zubac working double time to protect the Lakers’ rim. Gutierrez showed great court vision for the Trail Blazers finding his teammates open multiple times to keep the score tied. Portland’s Caleb Swanigan showed versatility with an ability to defend and score at the rim while sinking his mid-range jumper. However, Kuzma was relentless sinking his 30th point from distance at the buzzer putting the Lakers up by 5 entering the final quarter of the game.

Los Angeles opened the 4th ready to close out the win scoring a quick 6 points to go up by 13. Kuzma and Thomas showed great chemistry with Thomas not far behind Kuzma with 20 points of his own. Los Angeles out-rebounded Portland 28-18 on the defensive glass while shooting 63.2% from three and 63.8% from the field. Swanigan led for the Trail Blazers with 22 points followed by 4 others in double digits behind him. Portland dominated the offensive glass 11-2, but unfortunately turnovers cost them precious second chance points. Los Angeles was able to maintain the lead through the end of the game, finishing ahead by 12–110-98.

Ball is going to be a star, but he’s not the only up and coming talent the Lakers have going for them. Kuzma was nothing short of phenomenal in the championship game showing incredible ability to lead and score. Coach Luke Walton called Kuzma before the game and explained that Kuzma would likely need to be more of a play maker in Ball’s absence, but with 30 points at 60% from three Kuzma showed he was there to score the ball and win. Thomas is also a very promising prospect showing great chemistry with Kuzma. Thomas went 5 for 5 from distance and 88.9% from the field to contribute 20 overall points to the Lakers’ championship win.

The Trail Blazers are no slouch. Portland managed to get all 5 starters into double figures, and they absolutely destroyed Los Angeles on the offensive glass. If they can minimize turnovers, their second chance points will give them a very nice advantage to winning games in the coming season. I’ll add that Swanigan looks to be a solid candidate for a roster position if he can work on his shooting accuracy in the coming months.

Los Angeles is serious about being relevant again. Shedding TMZ cover boys D’Angelo Russell and Nick Young while going after Ball and Kuzma shows they’re ready to rebuild the right way, and it likely won’t take them much time to get where they need to be. I was incredibly skeptical about Ball given his father’s ridiculous behavior, but he has shown to be 100% the real deal. I’m excited to see what he will become.