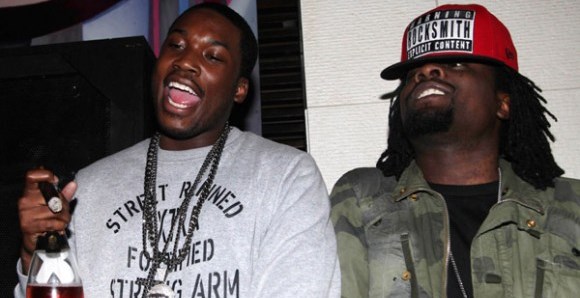 Meek Mill posted a myriad of tweets accusing his label mate Wale of not doing enough promoting for Meek’s sophomore album, Dreams Worth More Than Money. The album is slated for a September 9th release date and almost every member of the Maybach Music Group has promoted the album since the release date for the album was announced days ago.

Wale just ain't gone tweet a thing about my album…. He's been hating on me long time now …don't even text me cornball! #UNOTMMG

What critics fail to realize is that Wale did indeed promote Meek Mill’s most recent single “I Don’t Know” on Instagram over seven weeks ago. The release date for DWMTM was announced just days ago and label mates cannot be expected to jump on the promotion right away. Wale is not usually active on Twitter but is a constant Instagram veteran as he endorses his sneaker head personality and his myriad of appearances at sporting events all around the country. I applaud Wale for supporting Meek’s new single weeks ago on Instagram but no shade should be thrown at Wale for not promoting the album at a moment’s notice.

Wale re-posted the promoted tweet about Meek’s single on Instagram that was originally posted seven weeks ago and went on the notion that he’s not perfect.

“I never wanted anybody to think we take ourselves THAT serious. We’re rappers. I don’t need to take anybody’s shine.”

This is a very unnecessary distraction that is taking away the shine of a very productive year for the MMG label. The leader and “boss” of MMG, Rick Ross, released his Mastermind album in March in which he sold 289,925 units in its first five weeks of the release. Meek Mill’s album is also has high expectations just as his Dreams And Nightmares album did back in 2012.

Wale and Meek Mill have put out great singles together on numerous albums and mixtapes and a small bump in the road such as this does not need to affect their relationship going forward being on the same label.