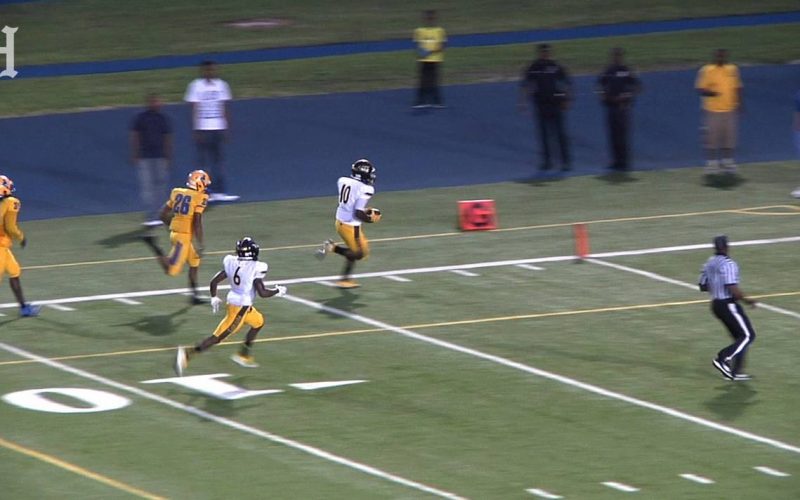 A furious second half comeback led by Miami Northwestern Bulls’ quarterback Chatarius Atwell Jr. came up inches short after an attempted 2-point conversion caught out of bounds in the back of the end zone. The failed conversion allowed the American Heritage Patriots to escape with the their third straight win to begin the season.

Failed conversions would loom large as Broward prevailed over Dade in the cross-county battle for supremacy at Traz Powell Stadium in Miami. Both teams were 2-0 coming into this game and riding off of the momentum of big wins with Northwestern defeating Columbus and American Heritage toppling Don Bosco in the previous week.

Quarterback Jason Brown from Hertiage was able to manage the game and come up with big plays to put his team in position to win. Brown’s signature highlight came when he connected with Anthony Schwartz on an electrifying 75-yard touchdown pass to end the first quarter giving the Patriots a 17-6 lead.

Northwestern would struggle on special teams by giving up a kickoff return for a touchdown to Miles Jones. In addition to that, on two consecutive kickoff returns Northwestern failed to pick up live balls allowing Heritage to recover on both. Brown would throw another touchdown pass to Dontavius Butler in the first half seemingly putting the game out of reach with a 27-6 halftime lead for the Patriots.

The deflated team and dejected home crowd complained about the special teams lapses as they headed for concessions amidst the fried conch air. “Remember…remember…remember… it’s not over, until it’s over,” said long time announcer William Wilcox over the loudspeaker.

Perhaps inspired by those words Northwestern was able to recover a muffed punt at the 5-yard line and bully there way forward with a touchdown run from 2 yards out. Heritage would fumble on their next possession and Northwestern was able to gain more momentum with a 27-yard touchdown pass from Atwell Jr. to Roy Livingstone. Atwell’s pass to Andre Adams for the two point conversion made it a 27-20 score in the 3rd quarter. With 10 seconds left in the third the Bulls were able to punch in yet another touchdown, this one from Kai Henry, a rush from six yards out which made the game 27-26. Northwestern would fail to convert on the 2-point conversion on a dropped pass in the end zone.

All of a sudden this was a totally different game going into the fourth with tension mounting. Brown was able to use Brady-like poise in the fourth quarter with some key scrambles to extend the drive that would prove to be the game winner. Heritage lined up for field goal on 4th down with 6:01 remaining, but then called a time out to think it over. The Patriots then lined up to go for the first down and Brown was able to draw the Bulls offside with a hard count resulting in a new set of downs for Heritage. Brown would then throw a fade route on another fourth down that Josh Alexander would catch for a touchdown.

“Jason showed what kind of player he is on that last drive” said coach Patrick Surtain. “Sometimes a game like this comes down to who has the biggest heart and those runs he made on that last drive showed you what that kid is made of.”

The score was now 34-26 with 1:22 remaining when Livingstone caught another touchdown pass to make it a 2 point game. Nortwestern’s attempt to tie the game failed with a tipped ball that would fall into Livingstone’s hands out of bounds.

“We made a lot of mistakes in the second half,” said Brown. “But this win shows how much heart we have and we’re looking forward to big things moving forward.”