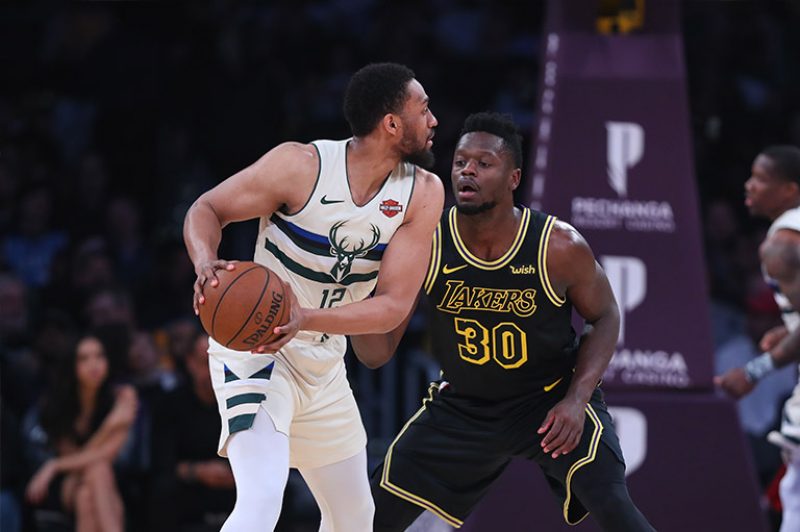 Another summer and another LeBronathon where some of the league’s mid-tier players will have to wait for their comeuppance. LeBron isn’t alone in the hold up of movement. He is joined by Paul George, Chris Paul, DeMarcus Cousins and others who have the ability to put a Matrix-like slow motion on the signings of their lesser established peers. That said, most teams are currently pulling lint out of their pockets when trying to assemble enough money to sign these perennial all-stars. We’ll take a look at some of the names that will follow the bigger free agents and how they can help whichever team they wind up with next season in summer where few teams have cap flexibility.

Barton’s importance to the Denver Nuggets was evident all season long with a career-best scoring output of 15.7 ppg. He’s fearless and attacks the rim at times like a skydiver without a chute. That type of confidence isn’t necessarily hard to find in today’s NBA but Barton’s improved ability to finish at the cup over the years improves his value.

Add to that a very respectable 37% three-point shot and you have an exciting talent who can a fill a role as a starter or be the life of the party off the bench. Unfortunately, his future in Denver is murky at best. The team values him but would likely have to go into the luxury tax to keep him. That could change if Wilson Chandler inexplicable denied his player $12.8 million option, but that’s not a likely scenario.

Bradley is one of a handful of 2016-17 Celtics that found the sledding hard this past season in less green pastures. An injury-plagued campaign has left many wondering what he can command in the open market. Make no mistake, Bradley planned to cash-in this summer but he played in just 46 unmemorable games total this season. Skeptics could wonder if the nagging injuries will make him a step slower where he makes his coin on the defensive end. Teams looking for a discount on his services will use that as a crutch, but Bradley is acutely aware of his value and will look for a deal commensurate with his body of work. The Clippers only got 6 games to look at him but Doc Rivers knows him well from them their Boston days which gives Bradley a good chance to re-up in L.A.

KCP bet on himself like many others in the sports landscape today by signing a one-year deal last summer after the market dried up on him. The results of that bet can be described as a push. Caldwell-Pope didn’t really improve his value in L.A. and he didn’t play poorly. It truly was a status quo season that could leave him thirsty again this summer for a long-term deal. On the bright side, his three-point shooting reached a career-best 38% and that could garner him some welcomed attention. The only hope he has to stay on the Lakers is if all of their lofty summer renovation plans fall through.

If there was an award for comeback player of the year (most improved doesn’t qualify) then Evans would be at the top of the list–granted he shined on a team that was abysmal. The fact that he had his best season since being a rookie (on another abysmal team) might give some reason for pause but he was a godsend for the scoring anemic Grizzlies this year. Reke is a power guard that bullies his way to the rim, but he has become a reliable shooter from three at 39%.  He’s always been an underrated distributor and needs the ball in his hands to be effective, but he doesn’t require a blood sacrifice for him to give it up.

With rounded down averages of 19 points, 5 rebounds and 5 assists per game his all-around production is valuable for a variety of teams. Sure, the Grizzlies mauled the handling of him at the trade deadline, but all seems to be forgiven and a return to Memphis isn’t out of the question for the right price.

In some ways, the eight-year veteran big is the unsung hero of the Utah Jazz. His 12 and 7 can be penciled in every night alongside his 104 defensive rating that brings physicality without verticality to the Jazz. Some in Utah even rallied for Favors to get consideration for the all-defensive team this past season. So from a team viewpoint, he is valued but where does that leave him on the open market? Favors still takes 48% of his shots within three feet of the basket and hasn’t evolved into a comfortable or reliable outside threat. He’ll extend out to 16 feet or so but nobody is closing out on him like they are running late for a flight.  The happy median for Favors is; 1. Utah has money 2. Utah struggles to garner free agent attention and 3. Utah knows what they have in him and won’t ask for him to do more. Where it gets tricky is if they want to commit long-term to Favors. Donovan Mitchell will play a big part in making the franchise attractive to upcoming free agents. The roster already screams chemistry with Mitchell, Joe Ingles, Ricky Rubio and Rudy Gobert–Favors is much quieter but that doesn’t mean he doesn’t fit.

Lopez has extended his career by becoming a true stretch-five. It could even be argued he’s fallen in love with the three-point shot a little too much. Lopez took just 31 threes in his first seven seasons but has attempted 712 triples over the last two seasons–712. He still gets just over a block per game by being tall and is a great locker room guy. Depending on the role he’s seeking, there could be a decent market for his services.

The once-promising big has gone from the doghouse in Philly to hot dogs on the bench in Dallas. Neither situation has been ideal.

Noel is another “I’m going to bet on myself” guy. Unfortunately, he underestimated the taste of hot dogs in Dallas and had a forgettable season that will find him hard-pressed to find a lucrative deal this summer. He will probably have to bet on himself again in a new situation and in a role that allows him to rim protect, rebound and catch lobs. The best way for him to do that is to try to land on a winning team that will feature his positives and that can win despite his negatives.

Nurkic wasn’t nearly as consistent offensively as the Blazers would have liked this past season, but he was impactful on defense. Portland has a massive decision to make with their roster after being dusted by the Pelicans in the playoffs. The Bosnian Beast has a good relationship with the main guys, Damian Lillard and C.J. McCollum, on the roster. However, that doesn’t guarantee a return–especially if he’s looking for the cap-strapped Blazers to give him a salary in the neighborhood of his buddies.

It’s unclear how much of Parker’s injuries versus the greatness of Giannis Antetokounmpo have limited the need for Parker to remain in Milwaukee. The obligatory it’s a combination of both probably applies. While Parker was recovering this past season, rumors swirled that he was seeking a max contract and didn’t intend to give the Bucks a discount.  That previous proclamation could prove to be cotton soft in what is a buyer’s market for NBA general managers. Parker could be Carmelo Anthony 2.0 and if he can get past his injury woes, he can still have a productive career.

Payton shows flashes of early Rajon Rondo at times then turtle shells his game for weeks at a time. Falling out of favor on two bad teams in the same season has probably given his agent nightmares. Ironically the two best landing spots for him as a starter are the places he’s already been. Payton could be looking at a (wait for it) prove it year somewhere as a backup. We haven’t quite reached the overseas market for him yet but he’ll need to show something this season.

Despite the sabotage that was planned for Randle this season by the Lakers, he foiled all plots for his demise. Luke Walton and company took a tough love approach to Randle and he truly had to earn his minutes this season. Randle eventually responded by playing in all 82 games, increasing his scoring average and field goal percentage in less time on the floor than the previous two campaigns. Randle is not likely to don the purple and gold again next season and could be heading towards an increased role on a rebuilding team. Randle unleashed could be fun in a new location.

Making an NBA cartoon with Smart starring as Mr. Intangible could be a terrible idea. Jokes aside, Smart’s value will never be in his raw statistics but rather in his dives, deflections, and charges taken. He plays the game in a cerebral way that sometimes borders on insane to both the opponent and his coach. Without question, however, is that he does more good than bad and impacts winning. Smart isn’t a lockdown defender as much as he is a big play defender and that has tremendous value to teams trying to change culture or teams wanting to maintain a winning one. Smart’s phone should be busy once free agency opens with the Celtics favored to match almost any offer he receives.

So…about that Brinks truck Thomas was hoping for. Injuries literally crippled IT all season in addition to a brash voice that didn’t go over well during his stint in the Cleveland locker room. Thomas will undoubtedly receive low-ball offers that will add to the enormous chip on his shoulder this summer. He’s still a talented scorer but replicating that lightning in a bottle season with Boston doesn’t seem feasible with any current team’s roster construction. Staying in the L.A. market could be great for his brand, but his game can’t fully explode with the way the Lakers and Clippers are looking to go.  It’s unclear just how much humble pie Thomas will have to digest in his quest for NBA riches this summer.