You are here: Home / Entertainment / Migos’ Mixtape Grind Is Making A Name For Themselves As One Of The Hottest Groups In The Rap Game 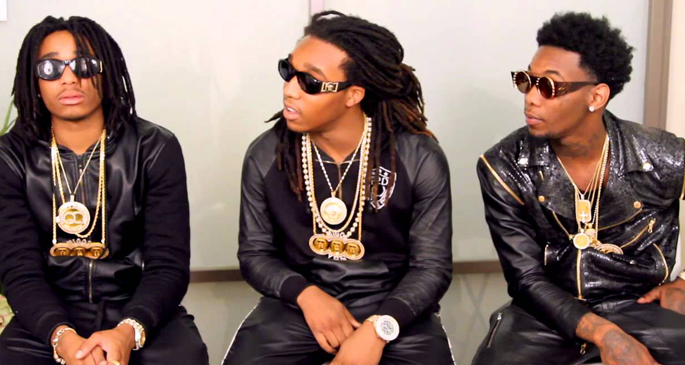 Migos, Atlanta natives that consist of the trio of Quavo, Offset, and Takeoff, have been making a name for themselves last summer with their smash hit “Versace” off of their Young Rich N***** mixtape. After suffering the setback of Offset doing a short prison term that lasted until October, Quavo and Takeoff released numerous mixtapes such as the first two installments of their “Streets On Lock” series. Consisting of mostly trap beats, the group continued to produce smash hits such as “Handsome and Wealthy” and “Jumpin Like Jordan”. Their independent grind is catching the attention of critics everywhere and their consistent flow of releasing music only adds to the electric buzz that they are creating in their hometown in Atlanta and all around the country.

Migos’ music provides bars that consist of “coming from the bottom” and obtaining the most prestigious materialistic rewards such as Versace clothes, Rolexes and Aston Martins. The trio has been making a name for themselves as the hottest group in Atlanta since Travis Porter. This trio made hits for strip clubs and produced trap music and music that people can just turn up to. The absence of Travis Porter’s consistency in music has provided Migos the opportunity to take hip hop by storm and produce bangers.

Migos’ most recent release was their third installment of the “Streets On Lock” series. It is a 26 song trap-tape that received contributions from notable names such as Rich Homie Quan, Wiz Khalifa, Soulja Boy, Young Thug, Ty Dolla $ign, and K Camp. Atlanta rapper Rich The Kid also made appearances on all three of the Streets On Lock series and has created his success based off of these many collaborations with Migos.

This highly talented trio will most likely continue their success in 2014 and eventually release a debut album. Their success through mixtapes over the past year has fans craving for more and will continue to attract some of Atlanta’s biggest names as well as the names of today’s major artists seeking collaborative efforts.