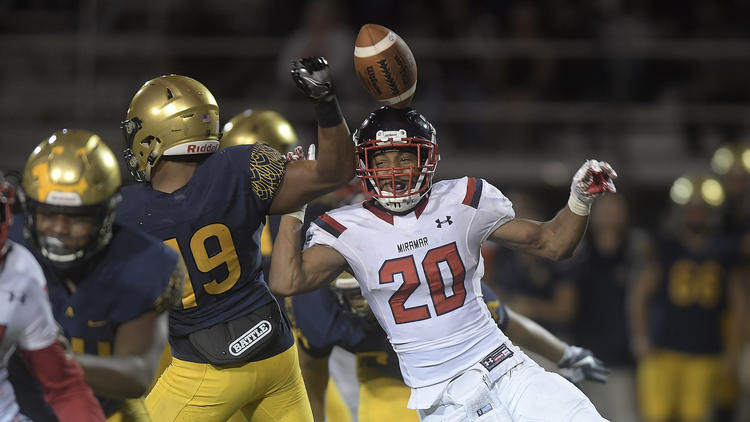 “I’m speechless right now,” said Miramar Head Coach Antwan Scott as a tear rolled down his face. “We came together as one and I love being a patriot.”

Miramar scored more points against a St. Thomas Aquinas team in one game than they given up the entire season. The Patriots spread the ball around to their playmakers to keep the St. Thomas’s defense off balance throughout the game. They were able to sustain long drives and quarterback Steven Williams scored the eventual game winning touchdown on a nifty touchdown run to make the 30-27 in the 4th quarter.

“I told the kids to believe,” said coach Scott. “Kids understood the gameplan and we were able to come out on top.”

Miramar came out firing on their first two drives scoring creating a 13-0 lead on a pair of one yard touchdown scores by running back Katravis Geter who had three total touchdowns. St. Thomas’quarterback Derek Wingo would help his team take the lead and the momentum with a pair of touchdowns of his own. The first on a bootleg run from about 2 yards and a touchdown pass to Virginia commit Tavares Kelly. With the score 14-13 Miramar would mishandle a punt deep in their territory causing a turnover on downs. St. Thomas looking to extend their lead attempted a shot for the end zone that would be intercepted by safety Henry Gray.

Patriots converted an onside kick to start the second half and converted a field goal to take the lead 16-14. The Miramar defense were able to get turnovers to stop any potential of a comeback for the home team Raiders. Defender Jesse Smith would take a batted ball to the house to extend the Patriot lead 23-14.

St. Thomas would battle back to take the lead 27-23 set up by an interception by Trenell Troutman that was returned for a touchdown but called back from a block in the back on the run back. Jesse Smith would come up with another huge play causing a strip sack that Devon Betty would recover for the Patriots. The most exciting play of the game followed on a dynamic run by Ralph Hughey where he spinned out of a tackle and ran down the sideline for a touchdown.

“We’re a program,” said head coach Scott. “They brought me on to lead their football team and do it the right way. Proud of my coaching staff and proud of my kids. Right now we’re on a high but tomorrow I got to bring everybody back and records don’t matter anymore.”