You are here: Home / Basketball / Featured / Mythology of Jordan 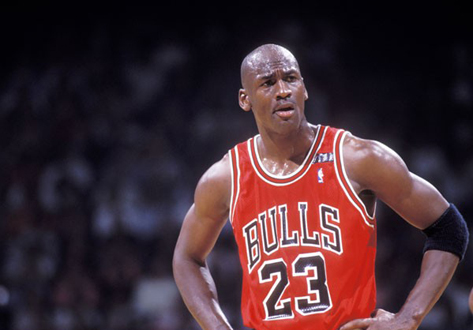 As humans, we learn to look up to certain people, whether that person is a fictional superhero or even a role model. We’ve all been there, staring in awe at greatness right in front of our eyes, greatness so inspirational we try to imitate in any way imaginable. We place this person on a pedestal– a pedestal so high that we can’t fathom anyone ever knocking them down.

Fast forward 10, 15 or 20 years later and we still cringe at the thought of anyone replacing them. So whenever another human being comes around and poses a threat to our hero, we protect them.

In this case, Michael Jeffery Jordan ruled the 90’s and early 2000’s as the best basketball player to ever live. He surpassed Wilt, Russell, Bird and Magic as the most iconic player to ever grace the court. As a result, many hold him as the role model for what elite basketball players should aspire to be. Maybe it’s because he went 6-0 in the NBA Finals alongside his plethora of individual awards. Or maybe it’s because he became more of a brand than just a player. Jordan is not only just a basketball player but he is a self-made billionaire who’s brand ‘Jordan’ to this day has held it’s number one spot in the urban market.

Now in 2014 we have players like LeBron James, Kobe Bryant and Kevin Durant who have all been compared to Jordan and whose talents have been questioned because they haven’t lived up to what the public expected of them. Whether it is James being 2-3 in the Finals or Kobe never being able to carry a team without Phil Jackson– you always hear the same phrase…“He’s not Michael Jordan”. And they are right.

There’s only one Michael Jordan and he is retired with his focus as owner of the resurgent Charlotte Hornets franchise. Unfortunately, Jordan’s name and on the court greatness has not retired in the careless whispers of many fans and media. This current generation of players aren’t permitted to simply establish their own path of individual greatness without Jordan’s name being mentioned in pale comparison.

But isn’t this only natural? That’s what we as spectators do– compare today’s players with the “Greats”. A better question is if all of these comparisons keep us from appreciating what we have now?

People will always have a sour taste in their mouth regarding LeBron because of the way he left Cleveland and proclaimed himself as “King” while wearing the number 23. Also, “The Decision” and his forever famous “Not 1…Not 2…Not 3….” line still has people four years later very upset. But what happens when you take away the off the court media drama? How many of us really appreciate LeBron’s successes on the court? 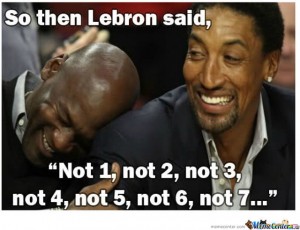 Every late game play he makes we dissect with “would Jordan have done that”?  It’s almost as if he’s being compared to a ghost. We place the expectations of LeBron at such a high standard that he can’t even face an injury without getting ridiculed for not playing through it.  We even neglected the Spurs comeback with two days of why didn’t LeBron try to play through cramps. ESPN NBA analyst Mark Jackson was even quoted as saying:

“If you’re LeBron James, the great ones find a way to tell their body, not now…I’ll talk to you tomorrow.”

We cannot control the human body, the body does what it wants. When muscles shut down it’s almost impossible to play through an injury without creating more damage. Ultimately, what was brought up during the discussion of James’ cramped leg was Jordan’s ’97 Finals where he played with the flu. Whether you believe he had the flu or not, why does the flu game have to be brought up by the media and fans?

It’s the mythology of Jordan.

We hold every great player like Kobe and LeBron up to this pedestal we’ve already placed Jordan on– knowing that he will never be knocked down. Today superstar players need to team up just to have a chance at reaching the Finals. In Jordan’s era players enjoyed their prime as alpha males until they realized later at the end of their career that they couldn’t do it alone. Jordan often gets credit for winning games on his own, even though he’s had two Hall of Fame teammates in Scottie Pippen for all six titles and Dennis Rodman for the final three. Not only do we neglect his teammates and coach but we also forget Jordan wasn’t a  saint off the court either. He’s had his troubles with gambling and fidelity within his marriage, but we turn the other cheek because he is perceived to be the best player to ever play the game.

We have to let Jordan and all his accolades stay in the 90’s and let players like LeBron and others that are actually still playing cement theirs. Then when all is said and done we can compare and contrast with players from other eras based on their full body of work. It makes no sense to compare every play and every season just for argument sake. We have to give this new generation of players a chance to eclipse our favorite players growing up. If not, we will miss out on some historical basketball being played right now only to hold regret on a missed opportunity to appreciate other forms of greatness outside of our own Jordan mythology .