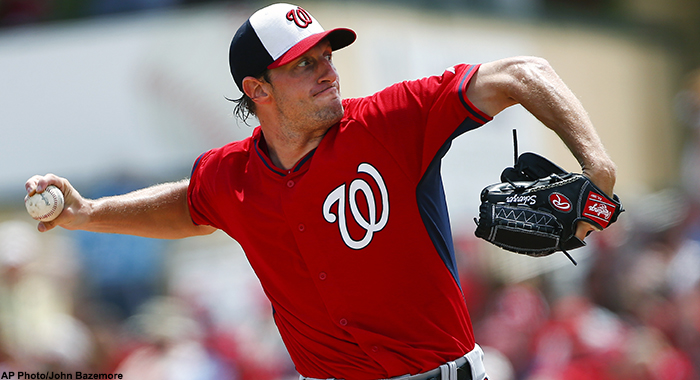 The 2015 Major League Baseball season is upon us. While all 30 teams enter the season with playoff dreams, only 10 squads will make it to the postseason. The oracles here at ShawSports have looked into the future, and will now provide you with a glimpse into October 2015. Let’s start with the National League.

The NL EAST: The Washington Nationals are not flawless. You can question their line-up and doubt their bullpen. However they may have one of the best five-man rotations in MLB history. They will run away with the East. The Miami Marlins have added some nice veteran names, but can Dan Haren, Mat Latos and Martin Prado play at their peak in 2015? Probably not. The New York Mets are on an upward trend but the addition of Michael Cuddyer won’t be enough to cure their offensive woes. Both the Marlins and veteran leadership keeps the Philadelphia Phillies out of the cellar…barely. The Atlanta Braves had a fire sale and will play like they were burnt to the ground.

The NL CENTRAL: The Pirates mix of vets and youngsters finally take the division from the St Louis. The Cardinals are still a very good team and it wouldn’t be surprising if they win a wild card spot or win the division again. The Chicago Cubs are depending on a young, extremely talented line up. Expect them to be consistently inconsistent. The Milwaukee Brewers remain a good but not good enough team. The Cincinnati Reds will be better offensively but the back end of their rotation looks to be a problem.

The NL WEST: An argument can be made that the 2014 LA Dodgers were more imposing then the 2015 version. Nevertheless the Dodgers are still the most complete team in baseball. Expect them to take the West pulling away. The San Francisco Giants continue their tradition of strong pitching and timely hitting. The Frankenstien-like quick build teams rarely work, but the San Diego Padres have one advantage. Their pitching was already very good before the additions of James Shields and Craig Kimbrel. The Colorado Rockies line-up has gotten better, their pitching is a disaster. The same can be said for the Arizona Diamondbacks.

Yes I do understand that Clayton Kershaw is still in the National League. But I believe Kershaw fatigue may settle in on the voters and if someone comes close enough they can steal his trophy. Scherzer is can certainly win the strike out title and a 20-win season would attract the voters.

Andrew McCutchen gets the win in a highly contested contest. The voters (rightfully) love to vote for a MVP from a playoff team. The Dodger stars will split votes, while the Nationals will win because of their rotation. The Giants won’t have a strong candidate. Leaving us with McCutchen and the Padres’ Matt Kemp. Go with the division winner.

Jorge Soler and Kris Bryant look like future All-Stars for the Chicago Cubs but Joc Pederson will have the better 2015. In truth the Dodger center fielder was Major League ready last season but the ‘Blue Crew’ just had too much outfield talent to bring him up. This season his combination of speed and power will be on display right from the gate.

Next is American League in Part 2