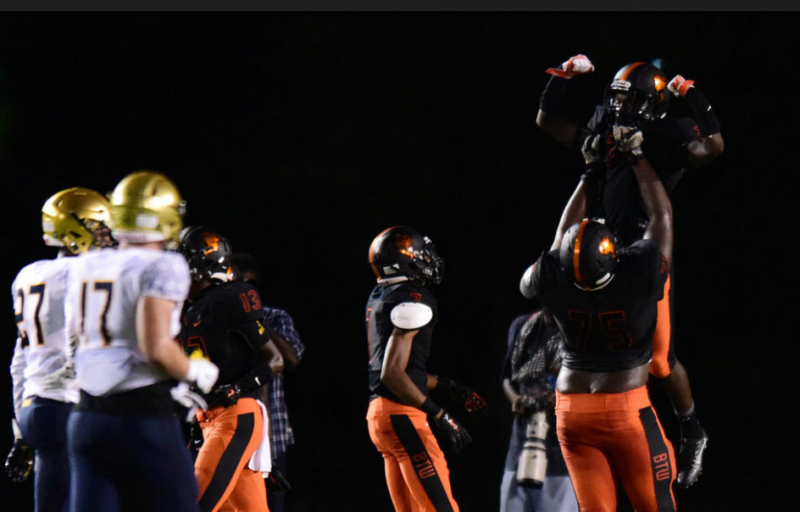 For the uninitiated, St. Thomas Aquinas is a private catholic school located in Fort Lauderdale with gold helmets and white uniforms resembling a high school version of Notre Dame. While Booker T. Washington high school, located in one of Miami’s most poverty-stricken neighborhoods called Overtown, donned orange and black uniforms which resembled teams that the University of Miami historically have assembled based on overall team speed.

Sharod Johnson’s touchdown catch with 2:26 remaining would prove to be the game winner as the Booker T. Tornadoes were able to hold off the St. Thomas Raiders in the final minutes with an interception by Dedrick Mackey after a lightning delay that threatened to postpone the game at Traz Powell Stadium.

This was a back and forth battle for national supremacy from the first to the final whistle under the lights on a muggy, wet Friday night in South Florida. After the Tornadoes’ go-ahead-score, the rain stormed accompanied by thunder and lightning caused a 35 minute delay.

Once play resumed, Florida commit quarterback Jake Allen was able to drive down the field and connect with Trevon Grimes who seemingly crossed the goal line with under a minute remaining in the game. Referees emphatically called Grimes down at the one yard line.  St. Thomas appeared shocked that the touchdown was not granted and rushed the next play which caused Allen to loft the ball into the end zone where Mackey was able to corral the interception and seal the victory for Booker T. and ultimately for Dade County.

Booker T. sophomore quarterback Daniel Richardson battled through what looked to be an ankle injury with 8:07 left in the 4th quarter but led the way by completing 18 of his 32 passes for 269 yards including 4 touchdowns. One of his touchdowns, a 57-yarder to DeAndre Williams, came as time time expired in the third quarter giving the Tornadoes a 21-20 advantage .

Allen totaled 255 passing yards but threw a critical interception in the waning minutes while St. Thomas was looking to milk the clock leading 23-21.  The interception led to the go-ahead-score.

Head coach Roger Harriot of St. Thomas Aquinas was disappointed that the this instinct classic came down to a judgement call from the officials.

“These type of games should never come down to a call,” Harriott said. “Booker T. hung in there and did what it had to do.”

Coach Tim “Ice” Harris from Booker T. Washington expressed that this victory was a stepping stone toward the national championship.

“This sets up for our ultimate goal to be the No. 1 team in the country,” Harris said. “We set up a schedule where all of our non-district opponents are nationally-ranked because we knew it was the only way to get where we want to go.”

Using each school’s history, makeup and similarities to collegiate powerhouses it could be said this is a modern day Catholics vs convicts. Maybe that’s too far but there are some striking similarities. The two juggernauts from South Florida not only represented their schools but their counties as well.  There has been much debate in South Florida on which county is the best when it comes to football. This is yet another historic chapter in the rivalry between Dade and Broward.

The matchup of 1. St. Thomas Aquinas versus 6. Booker T. Washington lived up to the much anticipated rematch from last year’s opener. The Raiders demolished Booker T. in last year’s game on their home field ending the Tornadoes 41 game winning streak 35-3.  This year with pride on the line as well as national supremacy, Booker T. took advantage of the home field seemingly using last years embarrassment as motivation to carry them to victory.