You are here: Home / Basketball / NBA Expanding to Disney World 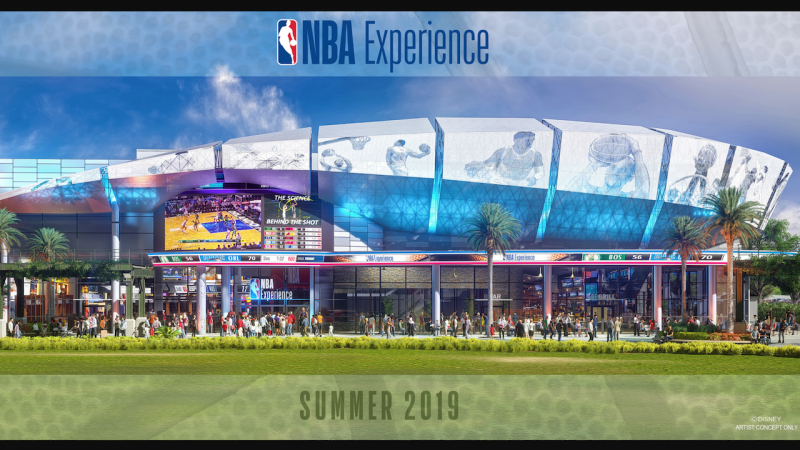 In a recent move, Disney and the NBA have agreed to work together to create an amazing NBA Experience down in Orlando. This is set to open on August 12th, 2019, as it was announced during a game between the Philadelphia 76ers and the Orlando Magic. There will be 13 different interactive activities that guests can take part in, all of them being very unique. Featured interactives include a slam dunk contest, shooting activities, drills, unique ways to measure your wingspan, vertical leap and dribbling. It almost sounds like a mini training camp but more fun.

Professional burst photography will allow you to see every possible angle of your dunks as well as an adjustable rim to accommodate people of all heights. As fans walk into the NBA Experience they will feel like they are walking out of the players’ tunnel in a WNBA or NBA arena, providing them an amazing experience.

On top of taking part in these cool activities your stats will also be recorded and tracked as if you were a professional basketball player. The leaderboard will change daily as it will keep pace with how every day’s NBA and WNBA games are going. By far the coolest element involved is the chance to re-enact historic moments in NBA history, while these moments haven’t been revealed yet let’s just let our imaginations take us to some great moments in history.

A very easy choice is Ray Allen’s shot in game 6 of the 2013 finals against San Antonio. Imagine being in his shoes making one of the most clutch shots of all time and saving your team’s season. Going further back how about being in Kobe when he dropped 81 against Toronto, or better yet Wilt’s 100-point performance back in the ’60s. Of course, a vast array of Michael Jordan’s buzzer beaters should be selectable as well.

There are so many moments that come to mind and it will be awesome to see which moments fans choose and even better to see people enjoying themselves.

This is another great example of the NBA expanding its brand and marketing itself brilliantly. Their brand has continued to grow while other leagues are starting to see theirs’s slowly diminished. While the NFL is still king in America the NBA is steadily creeping behind them and it’s due to moves like this. They market their sport and their players better than any other league in the country. See you in Orlando.