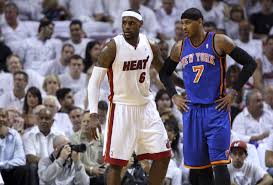 All the excitement of NBA Free Agency starting to wind down with only Eric Bledsoe and Greg Monroe as big names who have yet to sign. The Eastern Conference as a whole made strides in regaining relevance in the NBA with big signings. Most teams at least became competitive.  Here are some of the winners and losers of free agency.

It is no doubt that the biggest winners of free agency are the Cavaliers.  Not only did they regain their hometown hero, LeBron James, but they have started to build a solid contending roster for the future.

Behind James and Kyrie Irving, Dion Waiters and Anderson Verejao are both solid role players.  Cleveland has also signed Mike Miller, James Jones and  rumored to have interest in Ray Allen.  If they can manage a trade for Kevin Love, this team could very easily win the east.

Next to Cleveland I would put Chicago right up there with the best offseason so far.  The Bulls front office has been smart and calculated.  They realized when it was time to move on from Carmelo Anthony and landed Pau Gasol instead.

Between Gasol, Noah, and  Nikola Mirotic the Bulls will be strong in the frontcourt.  With the drafting of Doug Mcdermott and signing of Aaron Brooks, it all comes down to Derek Rose’s health.  If he is healthy, I would put Chicago as the favorites in the East.

After constantly missing out  on the big name free agents like Dwight Howard or Deron WIlliams, Mark Cuban finally got a coveted  free agent.  The biggest move for Dallas was stealing Chandler Parsons away from Houston.  Did they overpay for Parsons? Probably, but who wasn’t? Anyways, Dirk’s Pay cut will at least give them some room for another pickup or two.

I actually almost left the Heat off this list because of the way at Riley rebuilt the roster.  Still after you lose the best player in the world, you will not be as good as before. The Heat should still make the playoffs and we can see exactly what Spoelstra can do without the greatness of James to bail Miami out.

The plight of the Lakers continues in Los Angeles.  At the beginning of the summer Lakers’ fans had dreams of Kobe playing with LeBron or Carmelo.  Now they get to see Kobe and Jeremy Lin play together instead.  Tradition is no longer king when it comes to getting players, a lesson learned the hard way after Pau Gasol turned them down. Carlos Boozer was a good pickup but its’ not a franchise changing signing like fans would have hoped.

Another team with aspirations of getting a star was Houston.  A starting lineup with Howard, Harden, Parsons, Chris Bosh and Patrick Beverly would have been nothing to scoff at.  The Rockets missed on both Bosh and Parsons and seem like a weakened franchise after two great years of improvement.

Trying to create cap space Houston traded Lin and a first-round pick to the Lakers, got rid of Omer Asik, then were spurned by Bosh and Parsons.  They did get Ariza who is a better two-way player than Parsons.  Even with Ariza Houston did not improve enough, I still do not see them as a challenger in the west just yet.

There was a team who might not have made the winner’s list, but fell int-between and still had a decent summer.

The Hornets have continued to get better this summer with moves that put them closer to the winning side of things.  After making the playoffs and some key signings, there is some resemblance of a team that is on the rise.

Lance Stephenson was the biggest signing of the summer for the Hornets. He, Kemba Walker and Al Jefferson could be a solid big three. Marvin Williams was another nice move and Noah Vonleh definitely has potential.

The best move though for Charlotte was Utah matching the offer sheet for Gordan Hayward, which is a bad contract. In a changing East, the Hornets could be tough.

A team who was considered maybe the worst team in the Western Conference this time a year ago was suddenly just a win shy of making the playoffs.  With the signing of Isaiah Thomas the Suns could have a dynamic trio at the position if they re-sign Bledsoe.  They also signed Anthony Tolliver to help space the floor as a pseudo replacement for the loss of Channing Frye.

Overall this was a summer where the NBA shined.  Even in the heart of the World Cup and baseball season, the NBA was still the main focus in sports.  Not only did they get major attention but the lame duck Eastern Conference at least made itself competitive.  Adam Silver’s strong inaugural season finishes strong.