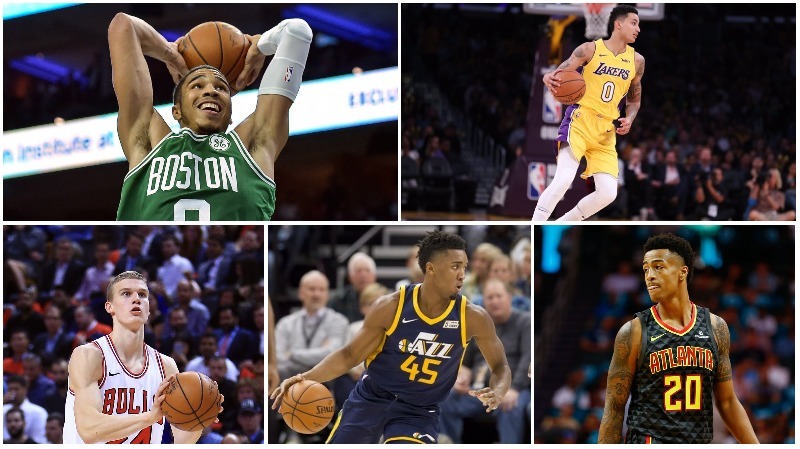 While Ben Simmons and Lonzo Ball dominant the rookie headlines, the league has been impacted by other first-year contributors for the second season in a row. Some of these neophytes are being pressed into increased responsibilities out of necessity as opposed to the normal “take it slow” approach rookies often are faced with. The pressure to develop is an underlying effect, in some cases, to speed up the rebuilding process and just the result of missing bodies in others. Five rookies have caught our eye to begin the season and there is a good chance other will continue to impress throughout the rest of the regular season.

Jayson Tatum
Tatum’s claim to fame started over the summer when the Celtics shocked the world and traded down to select the slender rookie at the third spot. He showed flashes of offense brilliance with crafty footwork and the ability to hit the NBA three in summer league. His role in the regular season was supposed to be that of a rotation player off the bench. The best laid plans don’t always come to pass and in the case of Tatum those plans have bared better fruit then the Celtics could have hoped for. An early season injury to Marcus Morris elevated Tatum into the starting role to begin the season and then the horrific injury to Gordon Hayward solidified his starting gig for the foreseeable future. According to the guys at My Top Sportsbooks the silky smooth 6’8” forward was an integral part of Boston’s impressive 16-game winning streak.

While Tatum’s offense was supposed to be the highlight of his game it’s his ability to defend that keeps him in the Boston starting lineup. Tatum has been a sneaky plus defender using his length in help situations and to defend on the ball. He’s a rookie and hasn’t been perfect but has nice timing and good instincts especially in help situations.

With a defensive rating of 98 through the season’s first 20 games Tatum is proving he’s more than a skilled offensive weapon. His early progression is making Danny Ainge look like a genius and has helped Boston to an unexpected start despite all their adversity.

Donovan Mitchell
Mitchell opened eyes as another NBA Summer League standout and has carried his success into the regular season for the Utah Jazz. His ability to score as a slasher and sometimes overly exuberant shooter has netted him 14.8 points per game in the early season. Somewhat more shocking is his recent insertion into the starting lineup sending the incumbent wing Rodney Hood to the bench. He’s aggressive and confident—which has its pros and cons—but the Jazz seem willing to live with it thus far.

The Louisville product has a lot to learn but seems to be as competitive as anybody on the Jazz the roster. That spirit has injected life into Utah’s lineup which seems to lack the fiery type most teams have. He and Ricky Rubio need to learn how to play off each other a little better as currently 65.3% of Mitchell’s makes are unassisted. The rook’s 37% shooting from the floor could be vastly improved if he wasn’t so isolation reliant at this young stage. Still, he’s making the NBA take note of his offensive prowess despite poor efficiency.

This kid has become a fan favorite in La La Land quickly because he hustles and can flat out score the basketball. He’s getting praise as the Lakers’ best rookie and is probably deserving of that exaltation through the first 19 games. He’s second in rookie scoring at 16.7 points per game and third in minutes at 31.3. At 6’9 he’s got great size and versatility cutting, spotting up and off the bounce.

He’s clearly benefiting from his on court and off court relationship with Ball. They are like a real life “Orange Juice” combo from NBA 2K17 which is ironic given how much hell Ball is catching for inconsistent play while his running mate is praised. It’s not all glitz and glamour for Kuzma. He is struggling with his defense as most rookies on less than stellar teams tend to do,– but it’s not hurting his minutes just yet. His arrival and play is making Julius Randle somewhat expendable and at the very least has forced Randle into playing small-ball five to get minutes. Kuzma has started 11 of the 20 games but could be headed back to the bench once Larry Nance Jr. returns from his hand injury. Either way Kuzma looks to be better than advertised and the Lakers have an attractive piece to work with when they go big name free agent hunting in the summer.

Truth be told, if it weren’t for Bobby Portis treating Nikola Mirotic like Glass Joe before the season’s first game we might not be speaking about Markkanen at this early stage. With one player Mirotic hospitalized and Portis suspended he became the only logical choice to soak up minutes at power forward for the Bulls to begin the season. Chicago is rebuilding and with Zach LaVine and Kris Dunn also on the shelf at the start of the season, Markkanen got all the touches he could handle early on. The misfortune of others has paid dividends for Markkanen who has started all 18 games for the Bulls posting 14.4 points and 8.3 rebounds in 30.4 minutes. Portis is back and Mirotic is also on the way but the rookie seems to have a strangle hold on the starting gig for now. In fact, due to his play and the Portis/Mirotic altercation the Bulls could ship one (or both) of the elder statesman away to allow for Markkanen’s continued growth.

His rebounding is highlighted by length and tenacity.

His scoring is elevated by the ability to knock down the three.

Markkanen has been both helped and hurt by being a feature guy to begin the season. His lowly 40% from the floor could actually improve as Dunn grows more comfortable as a point guard and by the eventual return of LaVine. As better players join him in the fray it will cover up some of the athleticism he lacks when he’s regulated to a more fitting role but he’s got great future. The Bulls got a good one and he should be part of budding young core that plays through mistakes and gets better in the coming seasons.

Collins is a Pogo stick with fierce physicality at the four/five position. This dude is active and often heads towards the basket like a heat-seeking missile. The Atlanta Hawks have taken a cautious approach with Collins because he’s young and has been foul prone so the shackles have been tight at times. He might be earning his unconditional release however, as the Hawks just aren’t very good and preseason starter Ersan Ilyasova has been banged up (and also just isn’t very good). In just 22.9 minutes a night Collins is averaging 11.5 points and 7.1 rebounds on 58% from the floor. Those numbers are screaming for minutes if he can cut down on the butchering 3.7 fouls he’s averaged in that same time.

There is nothing super stretchy about Collins’ game. He’s only attempted one three this season and he wants to get to the rim or he’s content with cleaning up offensive rebounds for put-backs.

Many of his fouls come on rotations or attempted hustle plays like these:


He’ll learn how to take calculated risks and in time should earn some respect from the refs too. In the meantime, the Hawks have all the incentive to give him minutes in abundance while the rest of their roster takes shape.

Not all of these rookies will become household names but they will be fun to watch and look to have promising futures this season and beyond.