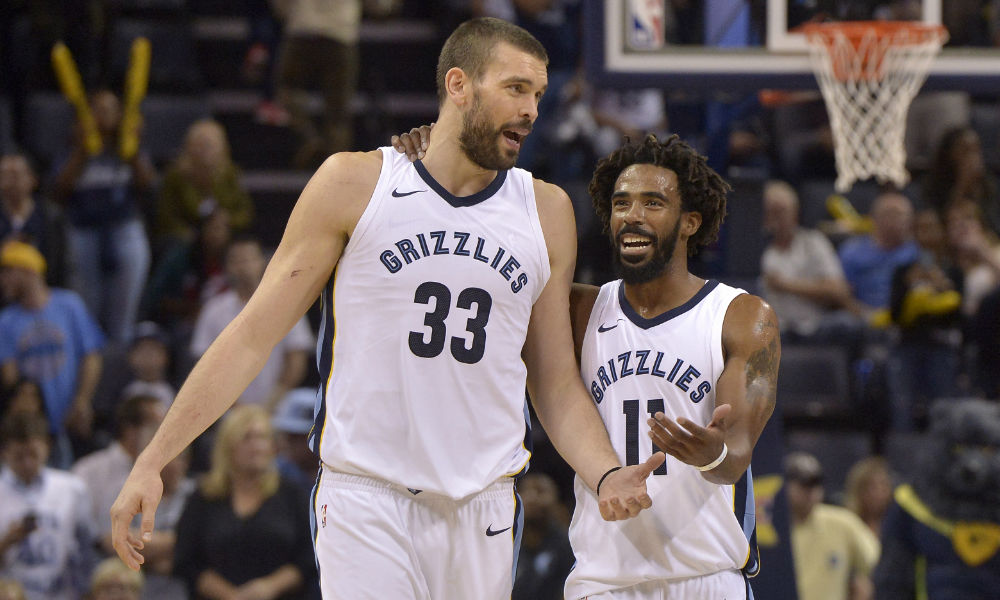 The Indiana Pacers were only 24 minutes into the 2018-19 NBA season but the team was playing their preferred brand of basketball. Indiana played in the half court set and turned near turnovers into smooth finishes. They embraced the mid-range game that every hoop scholar writes off as inefficient and outdated. They slowed the pace, contrary to the notion of using the chaos of the fast break to their advantage.

The Pacers’ 111-83 stomping over the Memphis Grizzlies was a continuation of Indiana’s breakout 2017-18 season. And on the other side of the court the Grizzlies could do nothing more than watch as Indiana flaunted its patented brand of inefficient basketball.

It’s not as though the Grizzlies were understaffed. The trio of Chandler Parsons, Mike Conley and Marc Gasol we’re all present and accounted for, as was rookie Jaren Jackson Jr. who notched 10 points in his NBA debut.

Yet the blue bears couldn’t find an answer and subsequently were left staring at the second-worst opening night loss this season, next to the Houston Rockets who were inexplicably lost in the bushiness of Anthony Davis’ unibrow.

The Grizzlies struggle represents a recurring issue this early in the season. Early losses become miniature panic attacks that, if left unchecked, snowball into season unraveling roadblocks. Which teams are at risk of losing control? Who needs an early season shakeup?

This column, NBA Panic Mode seeks to snuff out a team each week that is trying, and most likely failing, at regaining organizational structure. Despite championships being the ultimate NBA goal not every team is in contention. Thus, some squads must prioritize their own unique goals that, while not ending in a title, can help push the organization closer in that direction. Whether it’s losing a coveted draft pick of having a potential trade fall through, every team is subject to entering panic mode.

Though it’s just a few days into the 2018-19 season, the Memphis Grizzlies have already earned the honors to be the first team under the microscope in the inaugural edition of NBA Panic Mode.

Once a bastion for the galvanizing efforts of small-market playoff basketball, the grit and grind days of the Grizzlies are long gone. The team is at an impasse.

On one hand Marc Gasol is still loving his time in Tennessee, citing the effervescent aura of working-class perseverance. On the other, Memphis has embraced a younger profile, swapping out veterans for rookies, sophomores and young upstarts like Kyle Anderson.

“It’s the people who live there,” Gasol told Forbes on his love for the city. “Their culture, what they stand for, their grit. They’re not caring very much about what other people say about Memphis, and they’re just going about their jobs and getting the job done.”

For the better part of a decade, the Grizzlies embodied the city’s gritty culture, personifying the “little engine that could” mentality that pushed back against Western Conference powers. Since the turn of the decade, Memphis has had only had five All-Star selections but managed seven seasons over .500, channeling the proletariat approach into a modicum of success.

However, Memphis’ last All-Star representative, Gasol, came in 2016-17, the same season that marked the team’s last run to the playoffs. While Gasol, played 73 contests last year, his point guard and perennial star Conley was out for 70 games, leaving Memphis without the duo that helped shape its former success.

Then there was the loss of Grindhouse staples: Tony Allen and Zach Randolph bid the city farewell in free agency in 2017 while Dave Joerger, head coach during three playoff runs and two of the franchise’s four 50-win seasons departed for Sacramento.

Despite his committal to Memphis, the organization has drastically changed shape in Gasol’s tenure. Formerly comprised of wily veterans like Randolph and Vince Carter the 2017-18 Grizzlies became a lottery team, adding Jackson and Jevon Carter to the opening night roster.

Still, Gasol and Conley took the FedEx Forum floor last Wednesday completely out of sorts with a roster that was incomparable to their playoff days. They shot a combined 5-for-11 from the floor as Victor Oladipo, Domantas Sabonis and former Grizzly Tyreke Evans dance circles around the ill-equipped team.

Throughout the night Gasol was out-muscled by Myles Turner in the paint, forcing him to settle at times for 3s—which he hit—or try and work his way to the free throw line, neither of which came at a clip fast enough to cut into Indiana’s lead.

The story was much the same for Conley who, despite his best efforts, needed to shake off some rust after missing 85 percent of last season.

But more puzzling than Gasol and Conley’s struggles, were the rotations of head coach J.B. Bickerstaff. Ignoring recent acquisitions Omri Casspi and Carter, Bickerstaff shortened the starters and bench to just nine core players, while playing Dillon Brooks and Wayne Selden for a combined total 12 minutes.

Where should we begin?

Casspi is a proven shooter, albeit a defensive liability, worthy enough for a stint on the 2018 championship Golden State Warriors. He formerly went toe-to-toe with Steph Curry in an in-game shootout, and if not for his poor recovery, would have served a full tenure on last year’s title team. He’s shot over 40 percent in three of the last four seasons, and considering the Grizz shot 29.8 percent from the floor, he would have been a welcomed addition.

Still, in this iteration of the Grizzlies Casspi is an outsider. Maybe Bickerstaff wasn’t properly briefed on his abilities leading into the home opener (incredibly unlikely in a multimillion-dollar NBA organization, but hey, stranger things have happened).

However, that doesn’t excuse benching Jevon Carter and Dillon Brooks. Carter, the 32nd overall pick in the 2018 Draft is one of three point guards on Memphis’ full-time roster. If the Grizz would rather he develop in the G-League, there is a path for that through a two-way contract.

But with both of Memphis’ two-ways locked up, Carter was resigned to bench duty as Shelvin Mack earned minutes over him and under-performed like the rest of the team.

Brooks faced a similar dilemma. He started 74 games in 2017-18 only to play a whopping six minutes, replaced by Parsons and Kyle Anderson. Understandably, Anderson was Memphis’ off-season fish this summer. He jumped ship from San Antonio for this Grizzlies team and deserves at least a few shots at proving his worth. But Parsons, unfortunately, was the same, inconsistent wing he’s been for the last few years—Parsons went 3-for-9 from the floor. Five of those shots were 3s. All of those 3s missed.

Sitting Carter and Brooks is the exact opposite of what this Grizzlies team is. When veterans ruled the den in seasons past injecting young cubs into Grizzlies lineups made for good variety. Now, the Grizzlies are a young man’s team. Jackson, Carter and Brooks are huge parts of this team’s future, no matter how dearly Memphis holds the grit and grind years.

Bickerstaff has spent the last 14 years on NBA sidelines but only pops up at the front of the bench in desperate times. His last head coaching gig was with the 2015-16 Houston Rockets, a team marred by clashing personalities following Kevin McHale’s firing and had not yet found Mike D’Antoni’s brand of basketball.

Two years later, Bickerstaff’s run at Memphis’ job is largely by chance, first serving as an interim replacement for David Fizdale and later promoted, with a new deal, to full-time bench maestro. This will be Bickerstaff’s third shot at running a team and first time for an entire season (hopefully) but his current deck places him more as a figurehead than as Memphis’ coach for the future.

Right now, Bickerstaff is stuck managing at least the next season of Gasol (he can opt out of 2019-20) and the next two seasons of Conley (early termination option for 2020-21). Both players have turned the corner at NBA street and 30th—Gasol turns 34 next year and Conley just turned 31 last week. If Bickerstaff is here for any more than three seasons, it’s in Memphis’ best interest that he’s not coaching Gasol or Conley.

Even the Grizzlies general manager Chris Wallace has shown his rose-tinted glasses are in full effect, shying away from trade talk, despite his stars recognize the chance of competing for the playoffs is less than likely.

“It’s different for me because for the last eight years, I came into every season thinking we have a chance to win at a high level,” Conley told the Memphis Commercial Appeal. “This season, expectations are still trying to be that playoff team, that team that comes out and really makes it tough on everybody. But it is an awkward year with so many teams getting so much better [with] different acquisitions they made in the offseason.”

Rather than try and push Gasol and Conley to fit into a losing formula, building up the team’s current collection of prospects out-measures anything that is likely to be conjured by playing the duo 30-plus minutes per game. Memphis still has it’s top-eight protected pick in 2019 another useful asset for a youth-driven team.

Finding homes for Gasol, Conley, and any other vets that will allow Memphis to line its coffers with picks or prospects is the surefire move for future sustainability. Gasol and Conley’s trade value is biologically dropping by the day. It’s time to make way for a new type of grind.