You are here: Home / Basketball / NBA Preseason is back highligted by Derrick Rose and Dwight Howard 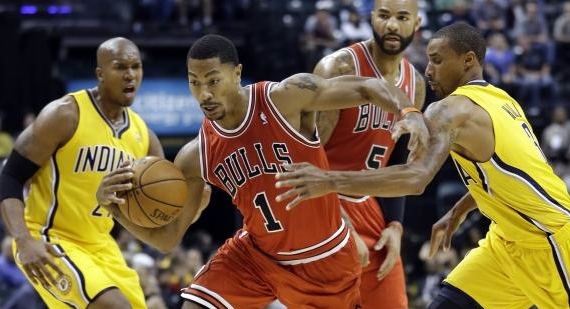 Finally the NBA has made its long awaited return.

OK…it’s only preseason but at least we get to see some of our favorite players back on the court. All eyes were on the 7pm game that featured Derrick Rose’s return to the floor as the Chicago Bulls visited the the Indiana Pacers. (This has the makings of a true rivalry).

Rose looked great as he attacked the rim relentlessly scoring 13 points in 20 minutes of action. He took some falls, absorbed and initiated contact but left the game unscathed. He reportedly said that he felt great after the game. Great start to his return and the Bulls have to be ecstatic.

Other action included Dwight Howard’s debut for the Houston Rockets, the new look Lakers taking on the Warriors and Oklahoma City playing a Turkish team. Check it out!