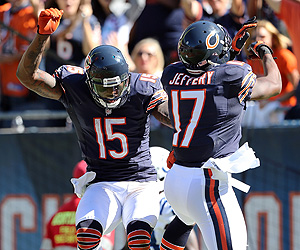 Earlier this week Bucky Brooks of NFL.com published his top receiving corps in the league.  Brooks stated that the best corps would have:

Number 2 Receiver: Speedster with the ability to beat over the top coverage.

For more on Bucky’s list feel free to check out his article here.

In a perfect world without a salary cap, every team would be able to meet the needs of their roster. Unfortunately, there aren’t enough Calvin Johnson’s or Jimmy Graham’s in the world to fill every roster.  However, the best general managers make the most of the budget to get the job done.  Here’s my list of the best receiving corps:

The Denver Broncos had the highest octane offense in the NFL last season.  The Broncos led the league in passing yards/game and touchdowns.  Demaryius Thomas was 4th in reception yards (1,430), and 2nd in touchdowns (14).  Julius Thomas tied for 5th in touchdowns (12) and Wes Welker tied at 10th with (10).  Most of their corps will remain in tact except in the case of Eric Decker whom they lost to the New York Jets during the offseason.  Broncos get an upgrade with Emmanuel Sanders in their lineup so we can expect more of the same from them next season.

The 49ers have not given way to the ground and pound aspect of their offense and rightfully so.  However, when they decide to pass their list of options is quite exemplary.  Vernon Davis led this unit in touchdowns (13) and Anquan Boldin hauled in 1,179 reception yards to lead the team.  Steve Johnson becomes the icing on the cake with his speed and ability to get down the field assuming that he can stay healthy.

Pierre Garcon led the league in receptions (113) and was a top 10 receiver in yards (1,346) last season and so was the latest addition to the Redskins, DeSean Jackson.  Jackson, had 1,332 in receiving yards and brought in 9 touchdowns as a member of the Philadelphia Eagles. RGIII will have some of the NFL’s best to throw to as Washington one of the deeper teams in the league at wide receiver.

Brandon Marshall and Alshon Jeffery are one of the better performing duos. Marshall was 5th in receptions (100), 5th in touchdowns (12) and brought in 1,295 receiving yards.  Jeffery came 6th in receiving yards (1, 421) and 10th in receptions (89) . Their size and physicality give them a major upside against most DB’s.  Don’t sleep on their ability to take the ball down field either–these two are legitimate deep threats.

The Falcons have by far the best one-two combo in the league.  They really could have done some damage had Jones remained injury free.  The retirement of Tony Gonzalez will be a huge loss to their passing attack, but they will still be able to compete.  Harry Douglas stepped up last year and could have a nice season.