You are here: Home / Basketball / Noah Basketball is changing the game of shooting analytics and coaching 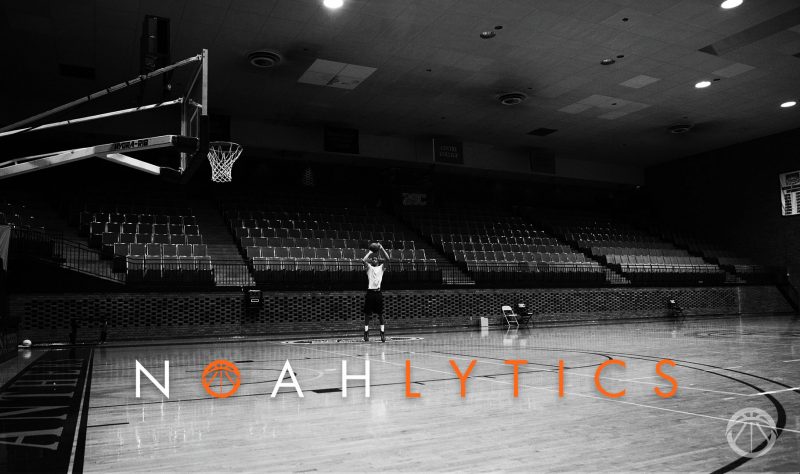 March Madness is in full swing and before we know it the 2018 NBA draft will be upon us. Young hopefuls from all over the world will position themselves for the opportunity to get their big break into the extremely competitive world of the NBA. Scouts for teams across the league will be paying close attention to the events that transpire over the coming weeks. Recommendations on players will flood war rooms as teams debate who they should make a move for when they’re on the clock. Want to be NBAers will have little margin for error if they want to be in prime position to get the attention they need to stand out from the rest.

When evaluating a basketball player, the first thing we typically reference is their average stat line. The current world of basketball places a premium on sharpshooters as the defense of old has gone by the wayside in favor of high-quality firepower. However, when looking at the shot data we simply see an average shooting percentage from the field, three-point range, and the free throw line. What these broad brush averages don’t report is the why behind the number.

Why does a particular player tend to miss when they shoot the ball from the right side of the floor? Why do players fall into shooting slumps? There are so many different coaches out there, and typically all of them have a different opinion (and often a “guaranteed” approach”) on the why behind any given basketball shot. You can see how a player in need of solid coaching would be confused about what direction to take the right advice.

Founded by Alan Marty as he was shooting hoops with his daughter in their driveway, Noah Basketball aims to change the way shots are analyzed while issuing non-biased concrete feedback on the spot for the most effective practice sessions possible. The name Noah is derived from the Biblical Noah’s Arc because the organization’s original focus was on the arc of the shot.

When the company first started, they were in the same place as everyone else. Over time they collected as much data as possible by being in the unique position to be transient. They visited various colleges and NBA teams around the nation standing under the rim observing the best shooters in the game. The data they’ve collected has clearly outlined the philosophy that has given Noah Basketball the conclusions they’ve developed about how to create the perfect shot.

So, who is Alan Marty? According to NoahBasketball.com Marty is currently Managing Director at Legacy Venture in Palo Alto, CA. For 24 years, he has been a venture capitalist and has held general manager positions at several major companies throughout his career. Prior to entering the business world, Marty was Associate Professor of Physics at Silliman University. He earned his undergraduate degree from Iowa State University going on to achieve his MBA and Masters in Education from Stanford University. Marty played basketball in college and he’s served as an AAU coach for many years. He holds 22 patents in optical systems, computer vision, and machine learning.

Intrigued yet? Marty’s resume is impressive, to say the least. An inventor’s mind combined with a great love for basketball was the birthing ground for Noah Basketball and over ten years later, the company is making a big impact in the industry.

I had the privilege of being able to talk with Noah Basketball’s CEO, John Carter, this week, and in one quick phone call, it was easy to see that the passion this company exudes for its product starts at the top. Carter first heard about Noah Basketball while reading an article, and was instantly intrigued by the company’s approach to gathering and analyzing shooting data.

“He has worked with thousands of players at all levels of the game, and has become an authority on how to improve shooting percentages. He speaks at numerous coaching clinics each year sharing significant unknown facts about shooting. He also served as an AAU basketball coach for many years. Prior to Noah Basketball, John had a distinguished business career. He spent eight years leading a corporate division that grew to $85 million in annual revenue. He founded a software company that was later merged with FullScope, Inc. where he served as Chairman of the Board until the company was acquired by publicly traded, Edgewater, Inc. John holds a Bachelor’s degree in Mechanical Engineering from Auburn University.”

Here’s how it works.

Noah Basketball analyzes three main factors of a shot: arc, left-right position, and depth as illustrated in the video below.

With the Noah system, shots are tracked in real time. The system is able to provide instant audio feedback to help the player understand the optimal shooting arc and depth. As the player works through adjusting to the feedback, they build important muscle memory for the perfect shot with the ultimate goal of developing players into confident, and consistent shooters.

“Noah gives my players audio feedback every time they shoot. It teaches them to focus on getting the right arc and getting a repeatable stroke.”

Along with the audio feedback is a complete real-time online mapping chart that coaches and players can access to understand the data on the three categories outlined above with easy to understand grades for performance, and consistency. Collectively, this online database is called “Noahlytics”. Mr. Carter said Noahlytics was the prescription for how a player could best work to improve their shot.

Carter went on to explain to me that it was an effort in education for the industry when Noah Basketball came onto the scene. Their goal wasn’t to proclaim that they were the only ones who knew anything about shooting in the industry, but there were accepted methods of evaluating a shot that wasn’t necessarily the best approach. For example, for a long time, people thought that the higher the shot, the better. What Noah Basketball has discovered, is that the ideal shot angle is right at the 45-degree mark. They’ve found that shooting too high is just as bad as shooting too flat from a percentage standpoint.

Another common misconception, even at the highest level of the game, is that players should practice the “Nothin’ But Net” shot. In fact, Carter said, all of the great shooters hit the back of the rim as much as half of the time.

I asked Mr. Carter what Noah Basketball believes is outdated with the previous system of evaluating a shooter based on percentage alone. He explained that you may have a shooter that has a 40% average, but he’s playing with a great point guard who finds him at the perfect spot for him to get a shot off–essentially, they’re being made to look better because another player on their team is enhancing their abilities. However, you may have another player who shoots 35%, but he’s actually got better skill when his technique is closely evaluated. Perhaps he has to work much harder to get a good look, or maybe he doesn’t have the fortune of playing with a teammate who feeds him the ball in just the right spot.

Understanding the why behind the shot allows a player to make accurate adjustments. Mr. Carter told a story of an NBA shooter who was being evaluated because he was struggling, and in his meeting with the team all three of the coaches on the call had a different idea of what the problem was. Without the data, Carter said, they don’t really know what the true answer is. With Noahlytics, coaches and players can compare data from say January to March and determine what things have changed.

Only 1 out of 11 high school players actually shoot with the proper trajectory, at the college level that average climbs to between 50-60%, and at the NBA level that climbs again to 75-80%. This, says Carter, is the reason Noah Basketball has such huge success at the high school level where a team can drastically improve their shooting percentage using the feedback from the data.

Carter says the most common quote he gets from coaches from elementary school up to the NBA level is, “This generation of players will not argue with the computer.” The computer doesn’t have any motives that would drive an opinion, the computer isn’t unnecessarily critical of the player, and it isn’t dealing with the factor of human error.

At the Sloan Conference this year, Marty’s daughter Rachel presented a paper on the data behind this hypothesis, and the over ten years worth of data is hard to argue with. If you’re into the technical analysis check out her paper here.

As you can imagine, Noah Basketball is also making a splash with some of the best shooters in the NBA– pun intended. Stephen Curry, arguably the best shooter in the league, has worked with the software, and he states in this video how the feedback from Noahlytics has helped him improve his shot.

In speaking with Mr. Carter, I mentioned how I thought this product would have a huge impact on the NBA draft. He agreed and stated that ten or more NBA teams will use the Noah Basketball technology for all of their pre-draft workouts this year. He went on to explain that they found that the number one indicator of a great shooter is how well they’re able to control their left-right consistency. In other words, how straight does the player shoot the ball? There’s no way to accurately measure this without the Noah technology.

Right now, Noah has a new facial recognition technology in beta-testing, and their goal is to get the technology into practice facilities so that any time a player walks into the gym their shots are being analyzed and calculated into their database without anyone doing anything. This technology will prove especially useful for college teams who are limited in the amount of time they can spend with their players in the offseason.

Coach Phil Cunningham of Troy says that he loves the software because it’s like having a shooting coach in the gym all the time. Carter said every player has a ceiling, and Noah Basketball’s goal is to help everyone hit that ceiling.

Training with an NBA player recently, Carter explained that the player was able to identify that using the Noah technology, he could now feel when his shot got out of whack and has developed the ability to self-correct when he is on the court to maintain his optimal shooting percentage. Another player described how this technology has helped him evaluate his performance pre and post-injury to be able to recover more quickly than one would normally while giving him the confidence that he is gotten back to where he needs to be using the accurate analytical data.

From high school, all the way up through the NBA, each player and coach has a different reason that they love the Noah Basketball technology. From my perspective, this innovative new product is a no-brainer purchase for any basketball team who wants to invest in the best and most efficient way to coach their players and improve their team.

Noah Basketball is becoming a huge presence in the market, and as sophistication in how to understand data develops, it’s certain that this organization will be at the forefront of the leaders among college, and professional teams across the basketball world.