You are here: Home / Basketball / Not their first Rose-O: Deng, Noah and Boozer will have to answer the call again for the Bulls 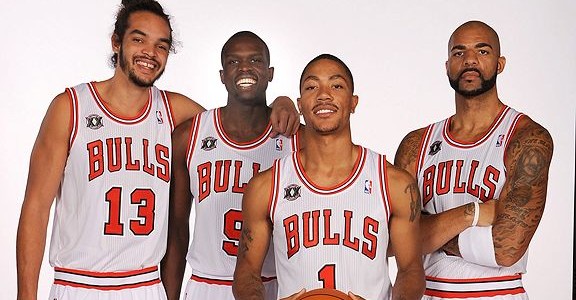 The Chicago Bulls are about as resilient a team as there is in the NBA…and they will need to continue to be so.

Derrick Rose will be out for the remainder of the season after tearing the meniscus in his right knee, leaving the Bulls without their All-Star and former MVP. After a sub-par start to the season, Rose was playing arguably his best game of the year until this happened:

Rose’s timetable for a return is estimated at 4-6 months after electing for the procedure with his knee that is safer in the long term. Some thought he may opt to have the meniscus removed and return sooner especially after the beating he took from the media and fans last season for sitting out. But he chose the smarter approach.

Now the Bulls have to rally together to remain competitive which is something they had to become familiar with just a season ago.

Kirk Hinrich will step into the vacated starting point guard role and Marquis Teague will be elevated to the primary back up. Hinrich started 60 games for the Bulls last season and posted mediocre numbers: 7.7 points,  5.2 assists, 2.6 rebounds on just 38% shooting. Teague didn’t see much time last season with shaky confidence and more skilled/experienced players ahead of him. But without Nate Robinson (or anybody else for that matter) in the lead guard role on the bench, Teague will be forced into rotational minutes. Should be fun!

While the back court situation is a bit suspect at point guard, the front court will be heavily leaned on as they were a season ago to bond the team together and produce. Luol Deng, Carlos Boozer and Joakim Noah will once again have to shoulder the load with heavy minutes producing points, rebounds and playing solid defense. That trio is truly the heart and soul of the organization.

Deng is in a contract year and should be extra motivated to produce as he tries to land a new deal. The key for him is the same as it is for all the Bulls and that is health. He can be a better than average play-maker for Chicago especially when he handles the ball in pick and roll with the bigs. He takes pressure off the back court and is one of those unique players in the league who can still have an impact if his shot isn’t falling.

Boozer had his best year on the Bulls a season ago with Rose out of the lineup averaging 16.2 points and 9.8 rebounds. So far this year he has been just as motivated and should get more touches now that Rose is out for an undetermined amount of time. The biggest issue he has always had is his defensive intensity, but he is too valuable on offense for Coach Thibodeau to sit.

Noah is one of the better passing bigs in the league but will need to look for his shot more often going forward. The Bulls need his energy and emotional leadership to translate into some of the big numbers he posted just last season. He always seems to be battling some sort of injury himself, but regularly tries to play through them because his team needs him to.

Without offensively-minded guys like Robinson or even Marco Belinelli on the roster like they were last season, the aforementioned trio have to raise their level of aggressiveness. Others like Jimmy Butler, Taj Gibson and Mike Dunleavy will be heavily relied upon as well but Deng, Boozer and Noah are the keys to Chicago’s success.

Look for them to deliver…again.