You are here: Home / Fighting / Pacquiao vs. Bradley things to watch for

Manny Pacquiao and Timothy Bradley will meet for the second time and hope to settle once and for all who’s the better man.

Both fighters have much to prove to themselves and to the millions of fans that will be deploying a watchful eye on this mega pay-per-view matchup.

For Pacquaio he can win in a variety of ways: 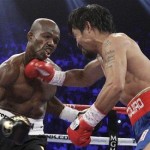 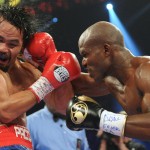 For Bradley to win things are a bit more complicated:

It’s really a shame that fans have not embraced Bradley despite his undefeated record. Bradley is not a favorite son so to speak like Pacquiao. who owns the crowd’s respect an adoration, even with questions about his desire swirling. It’s really a remarkable thing.

I am one of the few people who feel Bradley won their first fight and definitely think it was at least closer than those who think Pacquiao obliterated Bradley realize. With politics certain to be involved (especially with Pacquiao’s ability to bring in bigger money fights down the line) and Pacman’s superior power, I don’t see how Bradley wins without benefit of scoring a knockdown or knockout. And he doesn’t have the punch to do that.

Prediction: Manny Pacquiao in an entertaining 12 round decision.