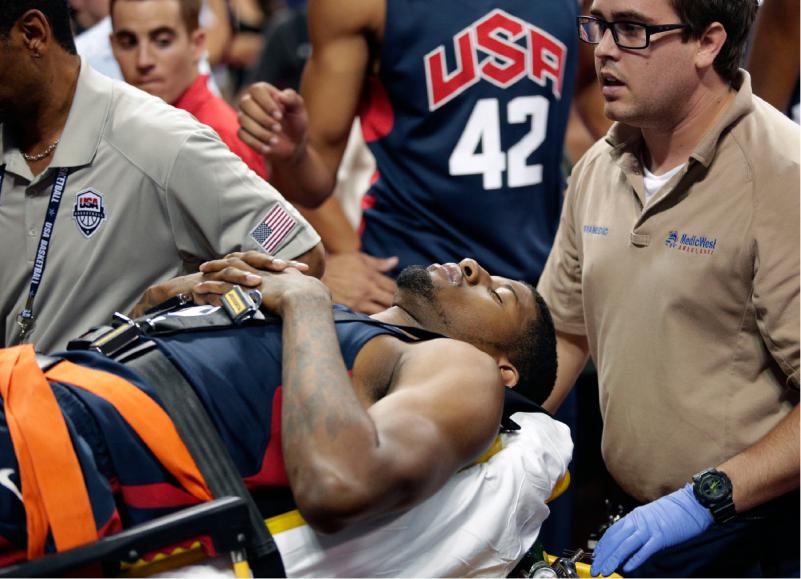 During Team USA’s Blue vs. White scrimmage in Las Vegas, we saw the gruesome leg injury Pacers’ All-Star Paul George suffered. Everybody knows the risks associated with playing in any basketball game but an injury like this happening in a scrimmage was still freakish in nature.

The myriad of injuries that can occur in meaningless games such as scrimmages now raises concern for NBA stars. Why should they risk potential injury by participating internationally for their country?

When I found out that Bulls’ point guard Derrick Rose was going to play for Team USA, I disapproved of this and thought that that was the last thing Rose should be doing. Rose has barely been able to step on the court over the last two and a half years due to ACL tears. Playing with Team USA puts him at a greater risk of injury and can delay his return the the Bulls who really need him.

Paul George’s injury could’ve happened to anybody on the court that night. James Harden, Kyrie Irving or even the league’s reigning MVP Kevin Durant could have easily suffered the same fate. There is no blame for FIBA because this injury could’ve occurred at any basketball summer tournament like Rucker Park or the Drew League. NBA players should use their scrimmages to get better and for learning experiences– not for intense battles open for public consumption via ESPN or other T.V stations. Having these stars  going all out before the NBA season starts is heart attack inducing behavior for general managers and owners.

Debates will now spark on if Team USA will continue to use NBA stars in their events. Some critics are even talking about only using college players to represent the USA. Paul George’s injury will also create the debate on the out of bounds marker being pushed back further in international play. Hopefully FIBA and other basketball organizations will be able to help create a safer environment for the best players in the world.

Most importantly, we pray for a speedy recovery for Paul George. A timetable on his return is still forthcoming but he is in serious danger of missing most if not all of the 2014-15 NBA season.