You are here: Home / Baseball / Philadelphia, We Have A Problem! 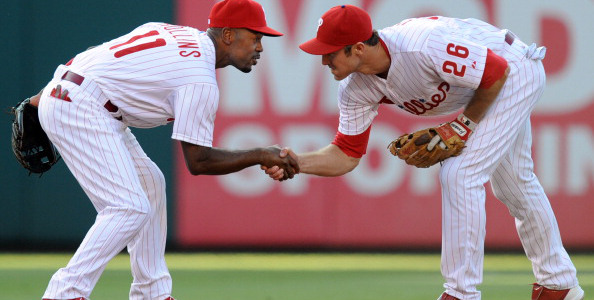 You’re a Major League Baseball general manager. The trade deadline is approaching, and your veteran rich team appears hopelessly out of playoff contention. What do you do? The answer is simple: you sell, sell, and sell! If only life was that easy for Rubén Amaro, Jr.

Amaro’s Philadelphia Phillies squad is full of talented players with compromised value. What should be a clear and very profitable sell job is clouded by a complex mix of negative issues. Among the problems; old age, bloated contracts, diminishing skills, no trade clauses, service time issues and just a dash of fan revolt fear sprinkled in. There is peril at every turn for Amaro. Finding “fair” value in trades may be impossible. However not making any moves will leave the Phillies with an aging roster and likely set them back for seasons to come.

Let’s take a look at some of the key players who could find themselves on a new team by Thursdays deadline:

The good: Cliff Lee is a former Cy Young winner (2008) and has seemed to get better as he has aged, making four All-Star appearances in the past six years. He looked better than ever early in the season with a smooth 2.28 ERA in April and May combined.

The Bad: Lee spent 2 months on the disabled list after his hot start with a flexor strain in his throwing elbow. He has not looked sharp in his limited starts since his return.

The Bottom Line: Before the injury Cliff Lee would’ve been highly sought after even with the huge contract. Now the Phillies would have to either eat huge money on the contract, or accept second tier prospects. Most likely Lee stays on the Phillies long enough to regain his pitching form, as well as his trade value. It’s very possible Amaro tries to deal Lee in August, as his contract should clear waivers easily.

The Good: Rumors of Papelbon’s demise have been greatly exaggerated. He has collected 25 Saves, a 1.83 ERA and a tiny 0.88 WHIP. He has been sunshine on a cloudy day in Philadelphia.

The Ugly: Papelbon has a no-trade clause that protects him from being dealt to eight (undisclosed) teams. And Papelbon has declared that he will only waive his no trade clause if he is the closer in his new location. Ok, no problem, there are 21 other teams that Phillies can trade Papelbon to, right? Well technically yes. However, it’s a near certainty that the 8 teams that Papelbon can block are also the teams most likely to take on such a contract. For instance, Papelbon wouldn’t block the Twins from trading for him because the Twins don’t have the budget to take on his contract anyway. There may be no market for Papelbon.

The Bottom Line: It’s doubtful anyone will bite on the closer despite his solid season. And if a team does, it is even less likely that the Phils can get anything of value in return for him.

The Good: ommmm…….I have nothing!

The Ugly: Howard is on pace for his 1st 20 plus home run season in 3 years but is only hitting .224, with a ridiculously low .306 on base percentage. With his doubles total also slipping, and his strike out rate out of control, there is little reason to believe Howard will return to form.

The Bottom Line: He is playing so badly that the Phillies have talked of platooning or benching him. Who exactly would trade for him? The Phillies have declared that they would not release him, and I take them at their word on that. However, any “trade” would basically be a giveaway, with The Phills eating his contract and getting no real talent in return. Give him away, and sure an AL team might take a flyer on him as a DH.

The Good: Burnett holds a respectable 4.15 ERA despite some truly horrific outings. So when he hasn’t been terrible he has been good. And not many would forget how good he was for the Pirates in 2013.

The Bad: Did I mention horrific outings? The fact that two such games have come since the All-Star break has to be a concern for any team willing to grab the pitcher.

The Ugly: Despite A.J.’s Pirate days, there is still a general impression that he does not handle the spotlight well. Any buyer would be a playoff contender, and therefore in the spotlight. Maybe a bigger obstacle in dealing Burnett is his contract. He has a mutual option for $15 million in 2015 (In which Burnett would receive at least $7.5 million if the team wants out). He also has a 20 team no-trade clause. One would have to believe there is no way he’d waive that right without having his option picked up, assuming he would waive that right at all.

The Bottom Line: With AJ’s shaky history, and contract requirements he is unlikely to moved. The one caveat would be if he wants to be traded and helps the Phillies out.

The good: It turns out 2013 was no fluke. He has been equally good in 2014 and is on pace for over 30 home runs with a solid .273 batting average. His bat is sought after by contenders.

The Ugly: Amaro, rather insanely gave Byrd a vesting option for the 2016 season, in which he can receive another $8 million.

Bottom Line: Byrd is a bat that teams want. The Yankees have been rumored to have interest. However the money and years will be a problem even for big spenders. He will likely be moved, but either with cash or for discounted prospect returns.

The Good: Although Mr. Rollins best days are behind him, he is still a solid defensive shortstop who is on pace to put up another 20 homerun, 20 stolen base season.

The Bad: Rollins will receive a salary of $11 million next season, unless he ends the 2014 season on the DL and is not healthy at the beginning of 2015.

The Ugly: Rollins would’ve made for a solid “hired gun” pick up for 2014 if he hadn’t secured the plate appearances to make his 2015 contract guaranteed. Now teams trading for him will have to pay a 36 year-old shortstop big money next season. In addition, Rollins has 10/5 status; 10 years at the major league level, 5 with the same team. Players who reach this level of longevity can refuse any trade. So would he go even if The Phillies find a buyer?

The Good: Chase is back! Well, pretty much back. He is not hitting for big time power, or running with reckless abandon, but he is hitting. He has a healthy .353 on base percentage and is on pace to surpass 80 in both runs and RBI’s. Most importantly, he is on pace to play 154 games. The last time he played that many games? 2009.

The Bad: Vesting options! If he stays healthy he would receive $15 million every year through the 2018 season, when he would be 39 years old. And of course, like Rollins, Utley is a 10/5 guy. Any deal must get his approval.

The Ugly: Even with the options, Utley will likely be desired. Second basemen like him just aren’t common. However, he is also the face of the Phillies, and loved by the home town fans. How much return value is enough to break the hearts of the Philly faithful?

The Bottom Line: San Francisco looks like an ideal spot for all parties involved. At least for this season it does. What about years 2015 and beyond? If the Phillies are willing to pick up a portion of that money they’d likely get some very good prospects in return. Those prospects better be special, the fans will not accept anything less.

The Good: Cole Hamels is one of the best pitchers in baseball. This season, the three time All-Star has been better than ever. Hamels owns a miniscule 2.55 ERA with a 1.13 WHIP. Even more impressive, he has seemed to get better as the season has gone on.

The Ugly: Cole has a partial no-trade clause. The teams that can grab him according to reports are: LAD, LAA, STL, WAS, ATL, NYY, BOS, TEX, and SD. Boston, Texas and San Diego are out of contention and seem like unlikely landing spots. St. Louis, Atlanta and Washington seem unlikely to make a run at anyone with that much money guaranteed. So the question is would the Dodgers, Yankees or Angels take the chance?

The Bottom Line: With so many pitcher injuries taking place this season, including Hamels himself, it would be a risky proposition for any team to take on his contract. The Dodgers are the only truly reasonable fit, with the Yankees a distant possibility. However the real question is would the Phillies even want to deal the one prime aged stud they still have? Most likely the Phils hold onto Hamels unless the Dodgers give them an offer that can’t refuse. He, if healthy, will have the same trade value in the off-season that he does now.

Final Analysis: While certain details are different for each player, the bigger picture is identical. The Phillies players are getting older, and at this point in their career are over paid. For the Phillies to get better moves must be made! It seems sacrifices will have to occur; whether on the financial or talent front. However there is only one certainty in this situation: that nothing will come easy for the Philly GM this week.