You are here: Home / Football / QB Match up Preview: Brady vs. Manning 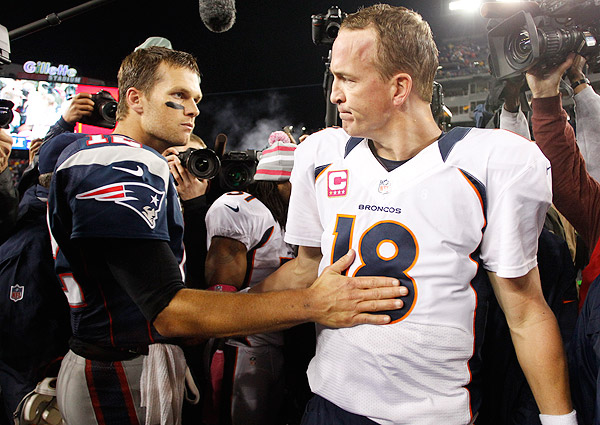 The New England Patriots (7-3) will play host this week to the Denver Broncos (9-1). But for many, this game will be about the QB’s.

Sunday’s match up contains arguably two of the best quarterbacks in the league and both have strong desires to go deep this post-season.  It goes without saying that all eyes will be glued on Peyton Manning and Tom Brady.  This game will be the 14th time that the two have played against each other.  Here’s how the two have done so far this season.

Aaron Dobson, New England Patriots
In his rookie year with the Patriots, Dobson has a total of 35 receptions for 492 yards. The 2nd round pick from Marshall had to step into the complicated scheme of New England and found himself struggling in the first few weeks of the season. Dobson truly is a deep threat and given that the Broncos secondary is the weak point of their defense, look for Tom Brady to spread the field and challenge the Broncos vertically. Denver has given up the 5th most passing yards in the entire NFL.

Wes Welker, Denver Broncos
Welker is in his 10th year in the NFL. Welker spent the previous 6 seasons as a member of the Patriots. This Sunday will be his first game back in New England since being acquired by the Broncos. Welker has 9 TD receptions on the year and with the Patriots having injuries plaguing their defense, it only seems right to assume that the Broncos will be on all cylinders.   Look for Peyton Manning to give Welker an opportunity to have a nice homecoming in New England.  Note: Wes Welker is listed as probable (Concussion)

Offensively the Denver Broncos can match up well against any opposing defense.  Last week, the Broncos faced the Kansas City Chiefs, a pretty solid defense, and came out with a win.  They put up over 300 yards passing, and a little over a hundred in rushing.  The Patriots defense will have to put much effort into eliminating the Broncos passing attack to have a chance in this match up, but with so many weapons across the field, the Patriots should hope to contain the Broncos at best.  The Patriots defense has allowed an average of 351 yards per game, and the Broncos offense has put up 455 yards per game.

The Broncos should be able to win impressively in New England.