You are here: Home / Football / Ray Rice Is Just a Fish in a Big Pond 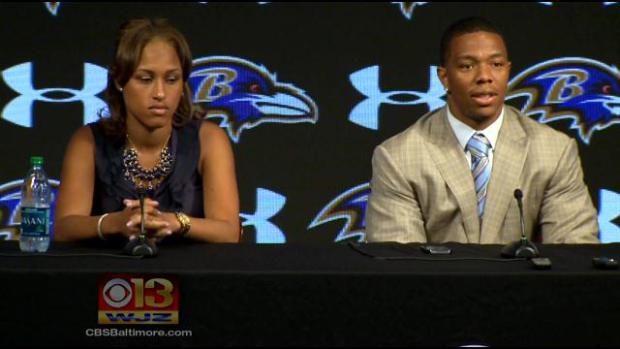 We hold professional athletes to a higher standard than the common man. We expect high-ranking officials to make proper decisions and assume leadership when the time is right. On Monday, September 8, 2014, TMZ revealed the horrific video of Baltimore Ravens’ running back Ray Rice striking his wife in an elevator at an Atlantic City casino. This is after National Football League Commissioner Roger Goodell caught immense backlash for only giving Rice a two-game suspension as his punishment. Now, the NFL and Baltimore Ravens are claiming that they never saw the video until that Monday morning and they acted based on what the police report described.

Since the release of the video, Rice has not only been suspended indefinitely, but has been cut from the team that he helped lead to a championship. It seems he has lost everything after the public was able to see what occurred that night. Even after the New Jersey court system made their ruling, his fiancé’s forgiveness and initial punishment handed by the NFL– Rice has been made the scapegoat for domestic violence from the national media.

From an outside perspective, I understand; America is angry and divided on how to handle the situation. Some are calling for firings for not only Rice, but for all the high officials involved in the “mishandling” of the situation. Others support Rice, believing his fiancé should have never provoked him. No matter the opinion, the general notion is there is a bigger problem than just Ray Rice. The public should not be fooled by the media, the video tape and social networks into believing Rice is the problem. His is just one of the many domestic violence cases in professional sports, mainly football. (Wire, 2014)

We have national media members and high-profiled individuals like ESPN’s Keith Olberman, Florida Senator Marco Rubio and Actor Seth Rogan demanding Rice to be banned for life. These people want to make Rice the scapegoat for a problem that has occurred several times before him and even after. The most recent charges were pressed on San Francisco’s defensive tackle Ray McDonald along with Carolina’s defensive tackle Greg Hardy. These two cases seemed to have been swept under the rug because there was no video-taped evidence. 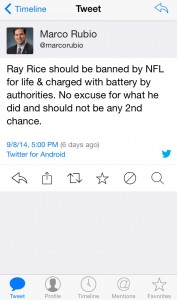 If you believe Rice should be banned from the NFL for life, take a moment to rethink the case before choosing your side. First, think of his family and what the media has done to, not only his wife, but his daughter as well. He is the main source of income in the family, and at 27 years old with still a  promising career ahead of him, is being told look for other work. Second, where was this backlash of banning a player for life when players were driving home drunk and killing people? (Did we already forget Donte’ Stallworth and Josh Brent ?)

Still, I am not suggesting the removal of these players either, but the general public needs to understand that Rice is being targeted as the poster boy because the video leaked and due to the manner in which the NFL handled the situation. It is obvious we are focusing on the wrong issue at hand, when one in four women are subject to domestic violence in America and when seven players have been arrested for either a DWI (Driving while intoxicated) or DUI (Driving under the Influence) since January 2014.

The NFL has a serious dilemma, as they continue to keep dealing with off the field problems with their players. The focus gets derailed from the game of American football to which player is in the news now. One thing for sure is, the general public needs to look at the overall issue and not point fingers at one or two people. If we concentrate on domestic violence as a whole in the league, we may have a chance at preventing more women of becoming part of the one in four statistic.