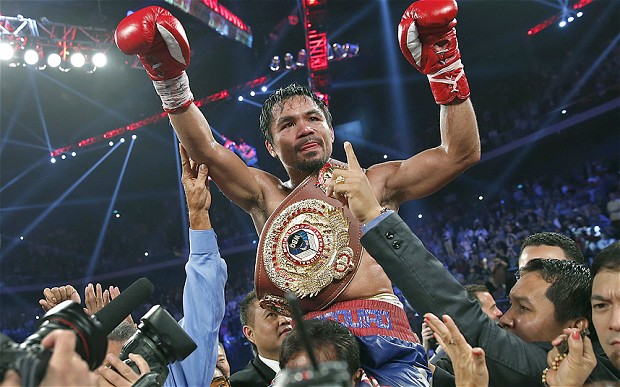 It was even easier than it was expected to be.

Manny Pacquiao (55-5, 38 KOs) gave the young Brandon Rios a boxing lesson in Macau, China that ended in a unanimous decision for the native of the Philippines.  It was a  lesson Rios will probably forget due to his chosen style of straight forward fighting. Hopefully he will learn that styles do indeed make fights and his chances in this match were never really that close.

Rios is fun to watch if his opponent is willing to fight in the pocket with him. But when paired with a true artist in the ring like Pacquiao, his style is easy to pick apart. Rios marched forward to his doom for 12 rounds and he was more a danger to himself than he ever was to Pacquiao.

But damn the kid has heart and one hell of a chin.

Pacquiao used this match as a 12 round tune up and has placed his name back in the conversation as one of the pound-for-pound best in the sport. Pacman hit Rios at will and controlled the fight with his left hand and superior speed. His overall quickness is a step slower but it was still good enough to confound and overwhelm Rios.

Pacquiao was adept at using combination punching to tag Rios in both the body and face. Before Rios could muster counter punches, Pacquiao ducked and slipped to his right making Rios swing at empty space. That sequence repeated itself so often that the crowd began to “ooh and ah” at Rios’ misses almost as much as Pacquiao’s connects.

If Pacman had pressed the issue late in the fight he might have been able to secure a knockout, but with memories of Juan Manuel Marquez still in his head he chose caution. Some media members speculate that Pacquiao’s good nature and respect for his opponent might have also played a role in him taking his foot off the gas when a knockout seemed to be on the horizon. Either way he punished Rios in every round and it had to feel nice to be in total control throughout after a two fight loosing streak.

For Pacquiao the door is once again ajar for super lucrative fights. Timothy Bradley could/should be his number one option in a rematch where he could rectify the loss many don’t believe he should have on his record. Bradley probably is going to explore other options for a pay day but may have to “settle” for a rematch with Pacquiao.

Another option is a fifth fight with Marquez. Unfortunately it might be something Pacquiao needs more than Marquez does. Nevertheless, Pacquiao is back. He might not be the super dominate welter weight from a few years ago but he is still formidable.

We just don’t know what’s next for him yet.