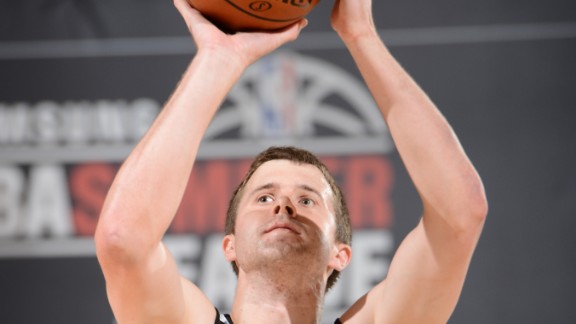 As the Raptors played their first Summer League game Friday afternoon against the Los Angeles Lakers, it was an unexpected face who lead the way for the Raptors.

John Shurna, an undrafted player in the 2012 draft who played his basketball in Spain last season, scored 21 points on 6/9 shooting in 24 minutes of play to help the Raptors win their first game in the Las Vegas Summer League, 88-78. Shurna played his college basketball for the Northwestern Wildcats and is known for great 3 point shooting ability.

Bruno Caboclo, the Raptors 20th overall pick in this year’s draft, had a productive game as he scored 12 points in 24 minutes missing only two shots. As everyone eagerly wanted to see what the 18 year old prospect could do, he didn’t disappoint as he displayed his long range shooting abilities and his solid defensive skills.

The game itself was very sloppy as there were 46 total turnovers. There wasn’t much flow to the game, but the Raptors built a large lead early and went through the finish line from there. Jordan Clarkson, who had 21 points on 7-15 shooting in 35 minutes, made a big effort to try and keep the Lakers in the game, but the Raptor’s great spacing on offense and adequate defense helped them win the game easily.

The Raptors will play the Nuggets in their next Summer League on game on July 12, 2014 at 6:00 pm est while the Lakers play the Pelicans on July 13, 2014 in their second game in Las Vegas.

For full stats and highlights of the game visit NBA.com (http://www.nba.com/games/20140711/TORLAL/gameinfo.html?ls=slt)