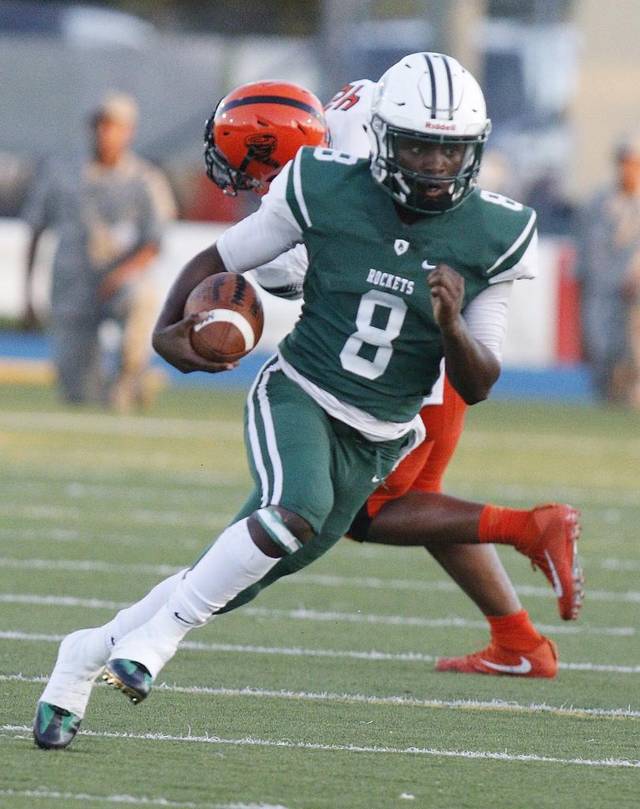 This weeks game schedule is subject to change because Hurricane Irma headed to South Florida. Went 9-1 last week with picks missing only on Deerfield Beach at St. Joseph Regional. Here we go week 3, here we go!

2. American Heritage (Plantation) (2-0) looked as dominant as any team in the country with a 31-0 romp over Liberty (Henderson, NV). Uncommitted Andrew Chatfield scooped up an errant backward pass for a 35 yard touchdown run as the defense flexed their muscles on their way to another victory. Heritage will look to continue their strong start at home against Miramar (FL) this week.

3. Miami Central (2-0) – Playing in district 6A alone is one of the toughest tasks for any high school football team. Central was able to squeak by the projected top team out of district 4A Booker T. Washington (Miami) 19-17 in an absolute thriller that came down to a missed FG by the Tornadoes in the waning moments last Thursday night. Now the Rockets travel to face a Bishop Gorman (Las Vegas, Nevada) team that is fresh from losing their first game to the top team in the nation Mater Dei (Santa Ana, California) after winning 55 straight. This will be a nationally televised game airing on ESPNU 10:00 PM Eastern Friday night.

5. Miami Northwestern (2-0) looked as impressive as any team this season. Last week they were able win 24-7 against a strong Columbus (Miami) team and face perhaps an equally strong South Dade team at Traz Powell Stadium in Miami. This should be one of the most competitive games this week and will show us just how good each team is and where they might finish in their respective districts.

6. South Dade (2-0) – The Bucs looked great in their first two games beating Coral Gables 26-18 and dominating Southwest (Miami) 57-0 last week. The real test comes this week when they travel to “The Mecca” that is Traz Powell Stadium to battle the Bulls of Northwestern. Everyone will take notice if South Dade can pull out the victory.

8. Booker T. Washington (Miami) (1-1) continues through a murderer’s row of a schedule in 2017. The heartbreaking loss to Miami Central will sting for a while but the boys from Overtown have a chance to bounce back against Miami Southridge. Southridge lost to Cardinal Gibbons in the season opener and has since rebounded with a relatively easy win over North Miami. I see the Tornadoes getting a win on the defending champions of 8A’s home field this week.

9. Miami Carol City (0-1) – The bye week should have done the Chiefs well as they take on Columbus (Miami) at Tropical Park in Miami. With a week to prepare and Columbus still licking their wounds from their match with Northwestern, the Chiefs should conquer the Explorers to get back on track.

10. Chaminade- Madonna (Hollywood) (1-1) – The Lions of Hollywood just edged the Patriots of Miramar in a 14-13 win on the road. Chaminade should have an easier time with Northeast (Oakland Park) at home. I expect the champions of 3A to get back to championship form with a dominant win at home.