You are here: Home / Basketball / Spolier Alert: The Denver Nuggets will be factors in shaping the playoffs in the west. 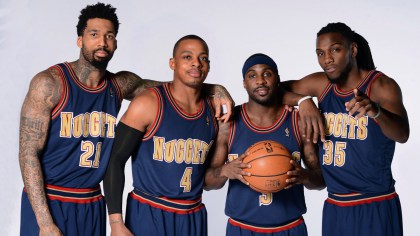 Positioning in the NBA’s Western Conference is a slippery slope. One loss (especially in the middle to end of the current top 8) can drop a team two seeds into peril against one of the conference’s true elite.

Still, matchups are key in the playoffs. Some teams are fully equipped and capable of beating one contender and could turn around and struggle against another of equal record…just because of the make up of the rosters.

The Denver Nuggets may indirectly hold the keys to the kingdom in the west as they can greatly impact the seeding over their final 14 games. In those games they play seven of the eight teams currently in the playoffs with only the Portland Trail Blazers escaping Denver’s reach. Four of the current playoff-bound teams (San Antonio Spurs, Houston Rockets, Golden State Warriors and Memphis Grizzlies) will play Denver twice more as the season winds down.

That’s crazy. It is also beautifully ironic for a team that has squandered their own chances for a playoff birth to potentially have so much impact on the others who are going.

The Spurs (Mar. 26 & 28) and Rockets (Apr. 6 & 9) have home and home sets against the NBA’s tenth-best scoring team with those sets coming before teams usually start resting players.  The Spurs are trying to hold off the Thunder while the Rockets are trying to catch the Clippers and stiff arm the Blazers to retain home court advantage. The Nuggets are currently 0-1 against both Texas contenders.

Speaking of the Thunder (Mar. 24) and the Clippers (Apr. 15), Denver is 1-2 and 2-1 against those teams respectively. The Spurs will have the advantage of playing the Nuggets right after OKC which does give them a slightly clearer picture of their cushion, although the goal is always winning. As for the Clippers if things remain largely as they are (which could happen) that mid-April contest could have less weight being so close to the end of the season. But again Denver plays both teams ahead of L.A. which has the potential to make things too close for comfort atop of the conference.

The Warriors (Apr. 10 & 16) have a chance to catch the Blazers and Rockets so their two dates against the Nuggets loom large. It’s unlikely with things being so tight that Golden State will be able to avoid a true showdown with real implications on the season’s final day against Denver. Meanwhile the Grizzlies (Mar. 31 & Apr. 4) are jostling with the Mavs and could catch the Warriors especially if Denver shoots GSW a couple of L’s. The Nuggets stand at 1-1 against the west’s current sixth and seventh seeds.

The aforementioned Mavs meet Denver early in the process of these final games (Mar. 21) and have already lost three times to the Nuggets this season. A fourth loss wouldn’t be ideal and could open the door for the Suns to climb back into the race for eighth which is a whole other thing in itself. The Suns don’t meet the Nuggets again this season after sweeping the season series 4-0 just in case you were wondering.

While many things have yet to take their necessary form it is clear that Denver has the power to make seismic shifts in how the west will be won. Playoff hopefuls…you have been warned.