You are here: Home / Basketball / Spurs Solidify Their Legacy As One Of The All-Time Best Franchises In Sports 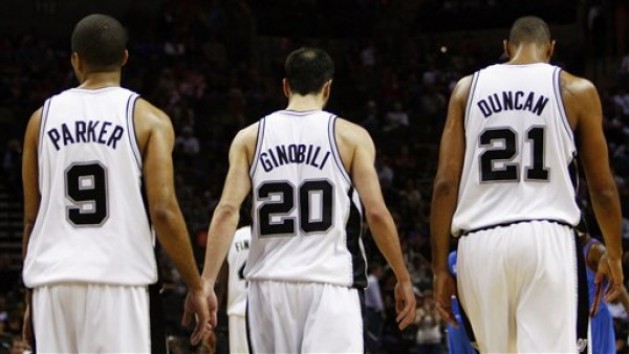 A fifth championship banner will now be hanging from the rafters in San Antonio.

The Spurs added one for the thumb with a 4-1 series win over the back-to-back champion Miami Heat. San Antonio was motivated and fueled by their Game 6 loss to Miami last year in the NBA Finals where they squandered a five-point lead within 30 seconds– that left an awful taste in their mouths over the past year. The Spurs have been on a mission to achieve vengeance since the first day of training camp back in September. Their fundamental style of basketball outplayed Miami and every other playoff team’s alleged athleticism. San Antonio’s stunning play by their bench this season has also made a name for themselves as one of the deepest rosters in the NBA. The emergence of Finals MVP Kawhi Leonard has put the NBA on notice. Once the trio of Tim Duncan, Manu Ginóbili and Tony Parker’s sail off in the sunset, Leonard is expected to take the reigns and become San Antonio’s new franchise player.

Duncan’s fifth championship automatically puts him on the list as one of the greatest players of all-time. Duncan was drafted in 1997, right after head coach Greg Popovich’s first year in San Antonio. In 1999, Duncan was mentored under the wing of 10-year veteran David Robinson and won his first title. San Antonio proved their dominance and defeated the New York Knicks in the series 4-1.

Ginóbili was drafted in 1999 by the Spurs but did not begin his playing career until 2002. In that span, San Antonio drafted Tony Parker in 2001 with the 28th overall pick. Parker was a first round steal and Ginóbili was also another major draft acquisition in the second round with the 57th overall pick in 99′. Coach Popovich has managed to keep this core together for a 15-year span and San Antonio’s dynamic trio has plenty of gas left in the tank.

Over the years,  Duncan, Ginóbili and Parker have been brought up the Spurs way. Fundamental and pass orientated basketball have always been stressed. Each game, a different player emerges. The Spurs don’t live by an individual being in the spotlight. The team knows how to move without the ball and develop the game of other players on the team. This season, the Spurs saw light in the tunnel with the emergence of three-point specialist Danny Green and 11-year veteran Boris Diaw. Green shot 45% from the three-point line during The Finals. Diaw was a defensive presence and match up problem with a versatile game that allowed him to contribute across the stat sheet. Diaw and Green’s impressive performances put them in the Finals MVP conversation alongside Leonard. Patty Mills also made a name for himself in the Finals coming off the bench and averaging 10.2 points and shooting 56% from the three-point line.

Duncan, Diaw and Mills are all unrestricted free agents in July. Coming off their impressive Finals performances, Diaw and Mills are likely to seek an extension with San Antonio. There was also debate on if Duncan’s fifth ring would signify the end of his Hall of Fame career where he would retire as a champion. He has not made a decision as of yet but there is no signs of Duncan slowing down physically, and in my opinion he has a minimum of three strong seasons left. He is 38 years old and and his body is showing no signs of wear and tear. San Antonio’s big three have all been taking pay cuts over the last 15 years so they can maintain their core. Duncan only made $9 million this past season when he could easily be making $20 million per season.

The Spurs were motivated by their inability to finish off the Heat in the Finals last year and are championship again because they learned from their mistakes. If San Antonio retains Duncan and their key players off the bench, there is no reason why the Spurs can’t repeat as champs in 2015. Popovich has this team playing smart basketball and they are an example of how the game of basketball should be played. The Spurs are one of the most iconic teams in sports by winning games and becoming championship contenders despite low-key personalities and a brand that was once considered ‘boring’. While the Bulls were dominating the 90’s and the Lakers were dominating the 2000’s, a small market team out of San Antonio was creating a blueprint to a NBA dynasty.

The Lakers, Celtics and Bulls have been labeled as the best teams in the history of basketball but the Spurs deserve a place on that list of all-time great franchises. They  have dominated the league and won championships the traditional and fundamental way which is great for the sport of basketball.