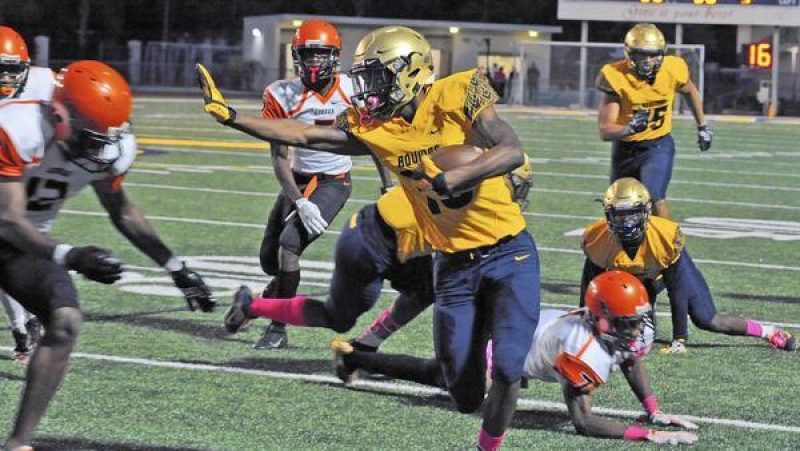 The Raiders of St. Thomas Aquinas continue to write their story for the 2016 season with an impressive victory over Broward County foe Boyd Anderson (B.A.) 42-7. Quarterback Jake Allen threw three touchdown passes and running back Mike Epstein scored three touchdowns as they watched from the bench for most of the second half.

Head Coach Roger Harriot was impressed with how his fifth ranked Raiders in the state of Florida jumped all over the Cobras from the outset. “I felt the guys got off to an extraordinary start,” said Harriot. “I thought the offense ran the ball well and the offensive line had an extraordinary performance.”

This chapter of the St. Thomas story saw Illinois commit running back Epstein set the tone early with gashing runs that seemed to demoralize the Cobra’s defense. All of the running plays in the first quarter went for positive yards as Epstein plunged into the end zone for their first score from 2 yards out. University of Florida commit Allen overcame an early interception to add balance to the potent Raider offense.

“I think he did a great job of bouncing back from some early adversity,” added Harriot. “That’s something he has been working on throughout this season. Glad he was able to put it back together and finish strong.”

Allen and Epstein, which sounds like a prestigious law firm, continued to make their case for the best backfield in the state with a nice screen pass that caught the Boyd Anderson defense off guard. Allen looked right then passed left to Epstein who steamrolled to the goal line for a 29-yard touchdown with 9:12 left in the 2nd quarter. Allen would add another 35-yard touchdown pass to seemingly put the game out of reach 28-0 midway through the second quarter.

Before the game started after the coin toss, Boyd Anderson refused to shake hands with St. Thomas. The Raiders seem to take this personally but still remained sportsmanlike during the game. Coach Harriot was proud of his guys. “We talk a lot about character and how to represent this organization and I feel like they showed an exceptional job of being mature and showing discipline.”

St. Thomas will look to continue their run toward another state championship with Blanche Ely at home next week on senior day followed by Flanagan in the regular season finale. Boyd Anderson will look to put this game behind them and look to get a victory at Northeast next week.