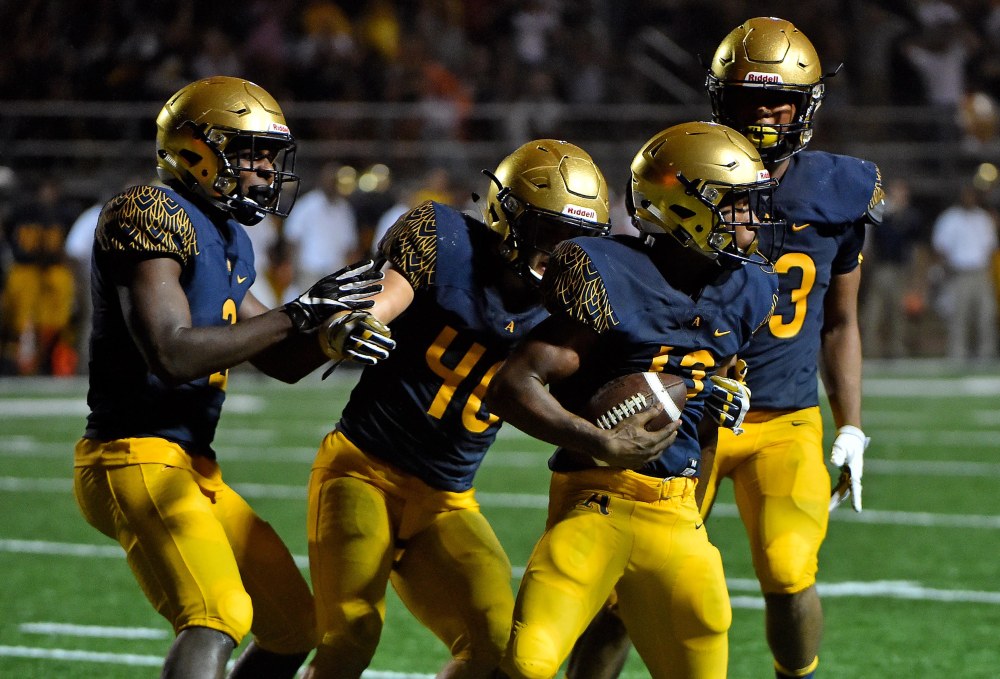 St. Thomas Aquinas quarterback Curt Casteel punched in a touchdown on a QB sneak from the one-yard line that would prove to be the game winner for the Raiders in the season opener at Brian Piccolo Stadium in Fort Lauderdale.

“Curt said we are on the one yard line, I can get this,” said Head Coach Roger Harriott. “We trust these guys and I’m proud of them.”

Both teams came into the game ranked in the nation’e top five and are defending state champions in their respective districts. St. John Bosco out of the Los Angeles metropolitan area ranked 3rd in the nation while St. Thomas Aquinas ranked 5th according to USA Today. The game was televised on ESPNU with plenty of alumni from the home team packing the sidelines. This game revealed how strong the Aquinas defense is and might be needed for victories throughout this season.

“It was a phenomenal energetic environment and this is what high school football is all about. I feel very confident in the entire defense, they are extraordinary guys, they’re confident and instinctive and it’s just a reflection of the coaches and the atmosphere here at St. Thomas,” talked Harriott.

Both defenses stifled the opponents offenses all game as both teams could only manage to score a field goal before overtime. St. Thomas scored in the first quarter and Bosco was forced to just match the score with 9:17 left in the 4th quarter due to a strong goal line stand by the Raiders. Casteel fumbled the running back exchange on their next possession in which the Braves pounced on the loose football. Jordan Battle shutdown the possession however with a leaping interception on a pass heading toward the goal line.

Bosco dual threat quarterback and Iowa State commit, Re-Al Mitchell, would set his team up for the potential game winning field goal on their next possession with 1:52 left in the game. Unfortunately the field goal attempt would sail wide left for the Braves.

The Bosco defense would hold St. Thomas to another three and out, but the Braves hopes to win the game was snatched out of the air by Asante Samuel Jr. on their last possession in regulation. It was St. Thomas’s third interception of the game. Aquinas would miss the extra point after their score in overtime giving yet another opportunity for Bosco to escape South Florida with a victory. The St. Thomas defense would come up big yet again stopping a reverse play dead in its tracks on their final down. The Raiders stormed the field and coach Harriot breathed a sigh of relief.

“We were fortunate to get this win and we are going to use this as a learning experience,” said Harriott. “Our defense was lights out and they did a phenomenal job of keeping us in the game.”

St. Thomas will play local foe Piper at home next Friday as St. John Bosco will look to bounce back against Garces Memorial at Mission Viejo High School next Saturday.