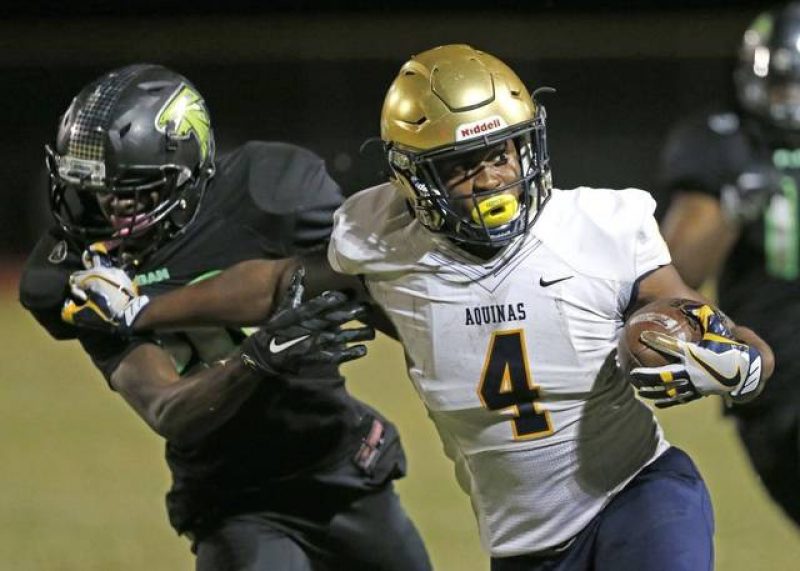 St. Thomas Aquinas took on Flanagan in a game that had the makings of a mismatch right from the start. St. Thomas took full control of the game in the first half scoring 31 straight points behind a well balanced offense.  The Raiders made it look easy scoring four touchdowns, with two on the ground and two in the air to put the game out of reach as the second unit played much of the second half.

Asante Samuels Jr., son of former NFL pro-bowler, led a stout defense that chewed up the Falcon offense on the ripped up field on a crisp night in Pembroke Pines.  The Raider defense held Flanagan to just one first down in the first half which came with 1:01 left in the 2nd quarter.

An attempt at a second first down in the first half was quickly halted by an interception by Samuels that was returned inside the Flanagan red zone.  The turnover set up the Raiders’ fifth score of the half.  Raiders quarterback Jake Allen was able to convert his second touchdown pass of the game with 21 seconds left in the half on a quick slant to the Syracuse commit senior Joshua Palmer from 15 yards out.

“We just attacked,” said Samuels Jr.  “We just did everything we do in practice and it all came together in the game.”

St. Thomas finished the regular season on a high note defeating the defending 8A state champions in dominating fashion.  This should give Aquinas plenty of momentum going into the playoffs next week.

“This is the confidence that we need to roll into the postseason,” said head coach Roger Harriot.  “We challenged our guys to be physical.  Our offensive line is the big brother of our program. Each position has their own identity. Jake Allen did a great job managing the game.  Our running backs and wide receivers were able to move the chains.  We feel good about the direction that we are headed in for the playoffs.”

The defending 7A champions St. Thomas begins its 2016 playoff run at home against Palm Beach Lakes next Friday.  Flanagan will look to defend their 2015 state title at home against Piper next Thursday.

“We expected to do this and I just want to finish off stronger going all the way to the state championship,” added Samuels.  “We can’t have the mindset that we’re going to lose and we expect to win it all.”