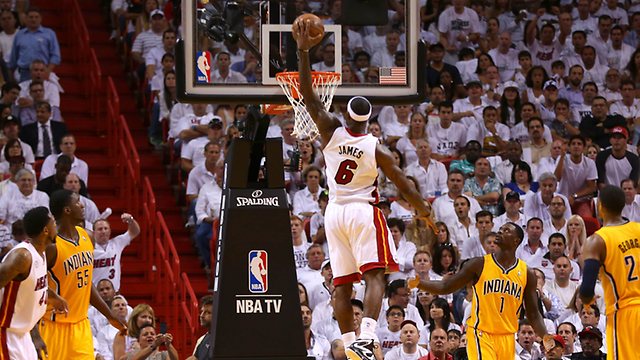 Sometimes you think you are ready for the big time. You talk the talk and maybe even for a while you walk the walk. But eventually your true self catches up to you.

The Indiana Pacers have been eying the Miami Heat for over two years. They have watched with thirst for what Miami has been able to attain as the undisputed best team in the NBA over the last two seasons.

After consecutive years where Miami bested them, Indiana wanted home court advantage against the Heat should the opportunity to lock horns present itself for a third straight season. Their wish was granted despite a mediocre finish to the 82-game campaign. They survived the first two rounds of the playoffs with their goal intact. Miami would be at the mercy of Indiana’s hospitality in the Eastern Conference Finals.

A semi-competitive series ensued with antics that will live on in the annuals of NBA time. (Pucker up Lance) But a familiar and expected outcome emerged from the downtown area of Miami at the close of the series. Miami advances to their fourth consecutive NBA Finals winning the series 4-2 and the Pacers head home looking for answers they never had–along with a home court advantage that never came into play.

For the majority of the series the Pacers’ bigs were neutralized by the mobility of Miami’s small lineup filled with potent shooters from three. The Heat spaced the floor expertly which led to their choice of layups or open shots from beyond the arc, confounding the lumbering Roy Hibbert and David West. It was a clinic.

Indiana’s lack of ball handling is like a scarlet letter and the Heat feasted on Pacer turnovers game after game. Indiana complained about the referees, they were physical and tried to get into the heads of Miami and none of it worked.

Miami’s temperament the entire series was even keeled because quite simply they have been here before. Teams pull out all the stops when they realize they are over-matched and the Heat never fell into the weak traps of the Pacers.

The point here is not to disrespect Indiana, but to acknowledge that their roster is flawed and despite Miami’s perceived vulnerability…the Heat reign supreme in the East (and maybe even in the league still).

The Pacers almost blasphemously thought they were better than the Heat and were taught that there are levels to this championship thing. A lot of teams make that mistake.

Indiana now has to embrace the bitter truth that Miami has forced down the throats of countless other opponents. The Heat’s talent is unmatched, their execution is precise, their maturity is stellar and their will to win is insatiable.

Armed with LeBron James, Dwyane Wade and Chris Bosh the Heat are elite in every sense of the word. They regularly expose the true selves of their often inferior opponents who seem to underestimate the mental aspect needed to be a champion. It’s just what they do and what they do is simply legendary.

The trio now searches for a three-peat as they have once again vanquished an over-hyped challenger to reach the NBA Finals.

Who wants to bet against them?