You are here: Home / Basketball / Featured / The Art of the Quadruple-Double Part 1: History shapes the way 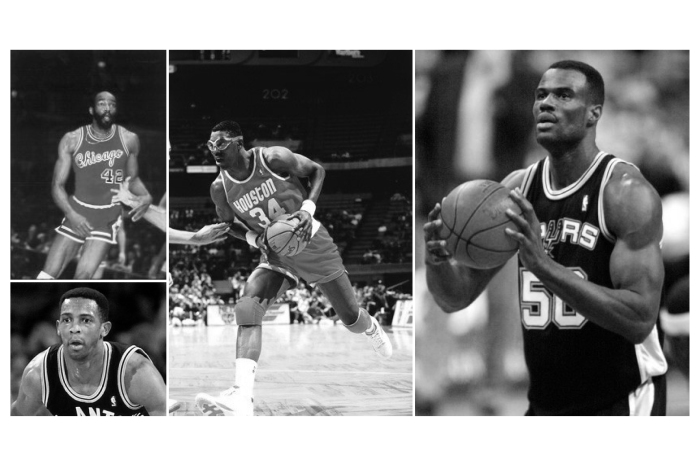 Michael Jordan has never done it. Neither have Magic Johnson, Larry Bird, Kareem Abdul-Jabbar or Julius Erving.  LeBron James and Kevin Durant are viewed by most as the NBA’s two best players in the league today and they aren’t likely to do it either.

No, none of those legendary players who were (or are) perennial All-Stars have ever recorded a quadruple-double.

That isn’t a slap in face to them or a slight on their greatness and personal accomplishments—which are many. It just shows exactly how hard the quadruple-double feat actually is.

It’s like finding a hidden treasure, spotting Big Foot or seeing a unicorn. OK maybe it’s not quite that absurd but it’s somewhere below those rarities/fallacies.

We will never know if guys like Wilt Chamberlain, Bill Russell or even Oscar Robertson ever accomplished the feat because steals and blocks were not counted and tracked until much (if not all) of their playing careers were completed.

The 1973-74 season marks the beginning of such records. By that time the “Big O” was in his final year as a player and was 12 seasons removed from ho-humming his way to the only season in which one averaged a triple-double.

Chamberlain did whatever he wanted on the basketball court and he was probably the one most cheated by the league’s failure to record steals and blocks for as long as they did. Russell is often regarded as one of the greatest defenders of all time so he too has likely been robbed out of some icing on the cake for his amazing career.

Nevertheless, since the 1973-74 season only four players have been able to stuff the stat sheet full enough to amass the elusive quadruple-double. This group of extraordinary gentlemen includes the following:

Three of the four players got their quadruple-double “by air” with blocks while Robertson obtained his “by land” adding double-digit steals. The exclusive list somehow manages to include two Spurs with Robertson and Robinson which to me is just as impressive as the act itself.

Looking at the stats its hard to say whose quadruple-double was the most impressive. Thurmond’s is the chunkiest across the board but was aided by the fact the game went into OT. Still he is another player who might have had more games like it if the league counted leagues and blocks in previous seasons. He said as much in an article on ChicagoBulls.com a few years ago.

But you know and I know and any good basketball fan knows that there were plenty of quadruple-doubles back in the 1960s. When I first came into the league, I played alongside with Wilt Chamberlain, and there were nights he and I were playing volleyball out there on the floor, blocking shots, deflecting passes, tipping rebounds. So it’s fairly obvious that Wilt had plenty of chances to get double figures in four categories…Bill Russell could also fill the stat sheet and was a threat for a quadruple-double on a nightly basis. He was a great shot-blocker and passer, besides being a tremendous overall defender. Another guy people don’t often think much about in terms of quadruple-doubles is Mr. Triple-Double himself, Oscar Robertson. I’m sure the Big O had games of 10 or more steals.

And hey, don’t forget about me. You think I never had a quadruple-double before 1973-74, when the NBA first started recording blocks and steals? Let me put it this way: I had 12 blocks in my quadruple-double game, and it was my 12th year in the league. That’s with two bad knees and more than 30,000 minutes pounding NBA floors, night after night. You bet I had plenty of quadruple-doubles before 1974. I’m not trying to brag, but there were games where it was ridiculous the number of shots I blocked. When I was young, there were nights when guys couldn’t come close to getting shots off on me. Only Russell could have blocked more in his career.

Without further regard to lamenting what can’t be changed, the NBA has now gone almost 20 years without a quadruple-double. I do find some subtle irony in the fact the only four players have been able to accomplish what takes four categories to complete.

The game continues to evolve and with all the talented players in the league today somebody is bound to join the exclusive club. We will take a look at some of the more likely candidates in today’s NBA in Part 2 of this feature next week.